Spill can have his F-14. Growing up in an A-6 family, I learned early on to love ugly airplanes. And let’s face it, our British cousins managed to come up with quite a few very effective, but ugly, airplanes. One, the first turboprop designed to operate from carriers, was the Fairey Gannet anti-submarine aircraft.

First flown in 1949, the Gannet entered fleet service in 1954, and would soldier on in various roles including Airborne Early Warning, Electronic Countermeasures, and Carrier Onboard Delivery until Great Britain retired their carriers in 1978.

348 Gannets were built, with small numbers exported to Australia, Germany and Indonesia.

One very unusual aspect of the Gannet is that, despite it’s appearance, it is a twin engine airplane. The powerplant was the Armstrong Siddley Double Mamba. Basically, two of the earlier developed Mamba gas turbines were built side by side, and ran a common gearbox. Each turbine powered one of the two contra rotating props.

In flight, for economy, one engine could be shut down. Its associated propeller would be feathered to reduce drag.

When the Royal Navy decommissioned the last of its fleet carriers, those same APS-20s would go on to serve in RAF Shackeltons.

Incidentally, the French, with a similar need for a carrier based ASW aircraft, came up with the generally similar in configuration Breguet Alize, though it used a single Rolls Royce Dart turboprop for its power.

The US Navy, after having used the large single engine AF Guardian, instead went with the rather conventional S2F Tracker for its sea based ASW platform.

Everybody knows and loves the GAU-8 30mm cannon mounted on the mighty A-10 Warthog. Fewer folks are aware of it’s little cousin, the GAU-12 25mm rotary cannon.  Primarily used by the Marine Corps AV-8B fleet, its five barrels give it a rate of fire of 3600 rounds per minute, with a maximum rate possible of 4200 rpm. The ammo pod only carries 300 rounds, so y0u only get a short burst. The GAU-12 is also part of the armament of the mighty AC-130U Spooky gunship, though its rate of fire in the application is only 1800 rpm.

The Marines also fielded an air defense varia[youtube https://www.youtube.com/watch?v=irn_74oXfUg]nt of their Light Armored Vehicle (LAV) fleet, the LAV-AD that mounted a GAU-12, but withdrew it from service as the recoil from the gun was pretty much shaking the vehicles to pieces.

An updated, four barreled verison, the GAU-22A, will serve as the gun armament for the F-35 Lightning II. The Air Force F-35A’s mount the gun internally, while the Marine Corps F-35B and Navy F-35C will have an option to carry a podded version.

While the video focuses on the armor piercing incendiary round, in reality, most of the time, the gun uses a High Explosive Incendiary round, and in spite of impressive accuracy, is used for suppressive fire as an area weapon.

After 48 years and 263 airframes, the IDF has this week finally retired the mighty A-4 Skyhawk.

That leaves Argentina, Brazil and Singapore* as the remaining users.

*Well, arguably the US still uses it, as Draken International contracts to provide services to the Navy and Air Force.

So, the Chinese put on a public display of their J-31 stealth fighter, their knockoff of the US F-22A Raptor.

As Fringe noted, a couple details- one, those RD-93s smoke more than I do. And the roll rate as show was pretty meh. And I would note that the typical US Raptor airshow demonstration displays much more performance in the vertical plane. This was just a zoom climb and a couple of sustained turns.

The real question is how well its avionics and stealth work, and that’s simply not something we can discern from an airshow clip.

Further, it should be noted that China has a large air force, but only a tiny percentage of it is 4th generation fighter aircraft comparable to US equipment.

When the A4D-1 Skyhawk first entered service with the US Navy and Marine Corps, it was simple almost to the point of crudity. For instance, to pare down the weight, it didn’t even have a battery. External power carts were needed to start the aircraft. The only “sophisticated” avionics on board was the AJB-3 computer used for the delivery of nuclear weapons. A combination of an attitude indicator and  crude analog computer, it guided a Skyhawk pilot through an “idiot loop” over the shoulder toss. It was good enough for nukes, but nowhere near precise enough for conventional weapons. Regular bombs and rockets were delivered using essentially the same aiming technology as a World War II dive bomber or fighter.

Later models of the Skyhawk introduced air-to-ground radar, but even that was more an aid to navigation than anything else, and weapons delivery was still contingent upon clear skies and an ability to actually see the target. And again, the actual delivery was made using the  same techniques as in World War II.

This lack of precision delivery avionics explains why Argentinian A-4B and A-4C aircraft had to press their attacks on British warships in the Falklands to insanely close ranges, to the point where their fuses didn’t have enough time to arm.

Eventually, digital computers would find their way into modern avionics. One nifty tool that quickly gained popularity was the Continuously Computed Impact Point mode. A digital computer would assess the attitude of the aircraft, its airspeed, known winds, type of ordnance selected, and altitude, and predict the impact point. As the mode implies, that process is updated continuously. It made visual dive bombing much, much easier, and much more accurate.

Updating older aircraft to take advantage of these new systems, and new smart weapons such as the Maverick missile, became a very popular option, especially for smaller air forces. And one of the smallest air forces was the Royal New Zealand Air Force. The RNZAF had operated 10 A-4K Skyhawks (essentially an A-4F with minor changes) since the 1970s. In 1986, they began an upgrade program that included the installation of the APG-66 radar (used in the F-16A) and other modern avionics, including the ability to fire the Maverick missile, the 1000 pound GBU-16 laser guided bomb,* and the AIM-9L Sidewinder missile. Known as Project KAHU, the upgraded Skyhawk was a formidable little jet, and the success of the project is evident by the subsequent upgrade of surplus A-4Ms to A-4AR standard for Argentina.

In 1998, the New Zealand government finally decided to replace the A-4 with the F-16, but in 2001 a newly installed liberal Labour government cancelled that plan, and instead decided to drop the combat mission from the RNZAF, leaving it with just transport and maritime patrol capabilities.

The KAHU Skyhawks were retired into long term storage until 2011, when they were bought by Draken International. Today they serve as contract adversary aircraft supporting US Navy and Air Force training.

*It could carry and drop the bomb, but had no designation capability. That laser designation would have to be provided by a controller on the ground, or an allied aircraft.

If you’ve ever seen Top Gun, you’ve seen Maverick and Goose return to the carrier, and the Landing Signal Officer calls “Three quarters of a mile, call the ball.”

The ball call in naval aviation tells the LSO far more than simply that the pilot has the optical landing system in sight.

The reply is as shown in the title, Tracer 601, ball, 3.2. First, let me steal a post in it’s entirety from Steeljaw Scribe.

Since the E-2A went to sea in the early 1960’s, “Hawkeye” was the name used for the ball call to the LSOs. Later iterations of the E-2C continued that practice but distinguished the a/c type by markings on the nose (a white “II” for Group 2 E-2s, or a “+” for H2Ks today). The Advanced Hawkeye, however being heavier than the E-2C required something more than just “Hawkeye” but kept to a single word. In doing so, VAW heritage was called upon and just as “Steeljaw” has been used for special evolutions for the new Hawkeye, the E-2’s predecessor, the E-1B Tracer (or WF – ‘Willie Fudd’) was called upon. Now, with an E-2D on the ball, you’ll hear “Tracer, ball…” 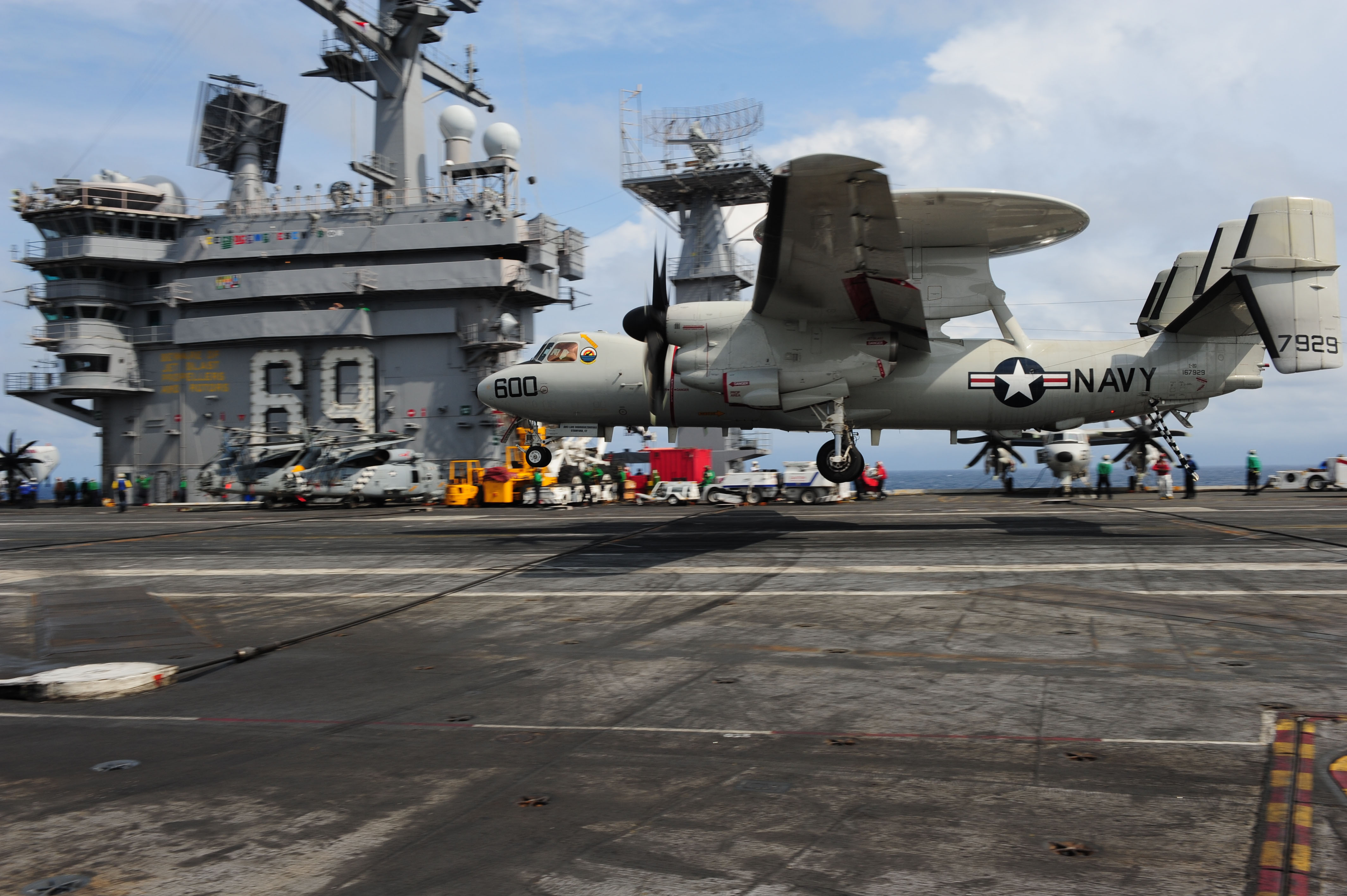 The first part of the reply tells the LSO (and more importantly, the arresting gear operators) what type of aircraft is on approach. That matters, because the arresting gear is adjustable, providing varying amounts of braking power based on the weight of the aircraft being arrested.  The arresting gear is always set to the maximum permissible landing weight for a given type of aircraft. But if the engine weight is set wrong, the result can be a broken aircraft, a parted arresting wire, or a failure to stop the aircraft in time. All these possibilities can lead to damage or loss of an aircraft, or worse, loss of life.

The second element, “601” is the aircraft’s MODEX number. Each squadron in an airwing is assigned a range of numbers, starting with 100 for the first squadron, 200 for the second squadron, and so on. With 5 E-2D Advanced Hawkeyes in a squadron, you’d normally see the MODEXs assigned as 600, 601, 602, 603, and 604.  Calling the MODEX lets the LSO know which crew he’s dealing with, as well as helping the Air Boss keep track of which crews he has airborne, and which are recovered.

The final element, the “3.2” is the remaining fuel on board the aircraft, measured in thousands of pounds, in this case, three thousand, two hundred pounds. Telling the LSO (and the Air Boss) the fuel on board helps keep them informed. Should the aircraft bolter (that is, not make an arrested landing, for whatever reason) knowing the fuel on board lets them know how much longer the aircraft can stay airborne. That helps them decide when or whether to send the plane to a tanker, or “Bingo” them, that is, divert them to a shore base.

A ball call can also contain a final element, either “Manual” or “Auto.”  This tells the LSO if the plane on approach is manually controlling the throttles, or letting the autothrottle (actually the Approach Power Compensator) control the approach.  Which method is used impacts how the LSO controls the approach and what calls he makes for corrections on the approach.

Which, they did a fine job of it, but never liked it. The most common attack employment of the Vought F-8 Crusader in attack was as flak suppression for Alpha Strikes over North Vietnam. But the preferred mission for Crusader drivers was always and ever hunting MiGs.

I’ll admit I never knew about the Shrike tests. And I can guess that the ‘sader guys were quite happy they never got tasked for the Iron Hand mission.

Full screen and 1080, there’s some gorgeous photography in here. As well as a good bit of splodey.

H/T to Steeljaw Scribe for tweeting a link to the vids.

Great video on Air Force and Marine Forward Air Controllers in Vietnam, with O-1s, O-2s, and OV-10s. There is good gouge on the shadowy Raven FACs and the operation to recover Bat 21. The only thing missing is coverage of the Army’s O-1 operations. It’s long, so just bookmark this for later tonight.