This is a pretty interesting video. It’s an older Type 033 Romeo diesel-electric boat used for training. It’s technology from the 1950s, but the Chinese built them well into the 1980s.

A couple thoughts. Voice pipes! Who still uses voice pipes? And isn’t that a little problematical from a water-tight integrity view?

Second, the food looked really good. But not having a proper mess deck is really weird.

The video is for domestic Chinese consumption, so of course the PLAN comes across looking pretty good.

The Office of Naval Intelligence has issued an assessment of the Chinese Navy (often referred to as PLAN) as well as its various Coast Guard type quasimilitary adjuncts.

There’ll be a quiz shortly after Load HEAT on Monday.

The Chinese Navy, long known as the People’s Liberation Army Navy, is undergoing a massive shipbuilding campaign to modernize. Long seen as a technologically backwards coastal force, it is attempting to build a modern blue water regional force. It has made great strides, but still has large numbers of legacy platforms in service.

The Chinese have slavishly copied the US Navy’s techniques and procedures as they learn to operate tactical jets from their first carrier, the Liaoning. Apparently, the also realize the critical importance of releasing “hooah” vids.

Spill thought this was pretty cheesy. I thought it was pretty good, though obviously not “homemade” the way most US vids are.

25 years ago, the Chinese Navy (or more correctly, the People’s Liberation Army Navy) was a joke. Crudely build ships with fire control and armament little more advanced than what we operated in World War II would have been easy pickings for our Navy. But China, leveraging the vast increase in GDP, set out to build a quality navy, and has used both domestic development, and reverse engineering of western systems to field ever increasingly capable warships.

One of the first truly modern warships the Chinese fielded was the
Type 052, a class of two ships entering into service in 1994.

Designed prior to the Tiannamen Square massacre, they were built with western powerplants and electronics, though they used largely Chinese armaments.

Next step in development was the confusingly designated Type 051B, which looked nothing like the earlier Type 051 series.

The Chinese only built one Type 051B, and it was apparently not considered terribly successful. But clearly the clean modern hull lines and general layout can be likened to such western types as the British Type 23 frigates (though the Type 051B was considerably larger). Interestingly, the Type 051B reverted from gas turbines and diesels to a steam plant. Chinese technology wasn’t quite capable of using indigenous marine gas turbines to power a destroyer yet.

That would change with the next series, the Type 052B.

One of the problems with the earlier series was the lack of an effective area anti-air weapon system. Earlier series carried the HY-7 missile, which was in effect a reverse engineered French Croatale short range missile. Roughly equivalent to our RIM-7 Sea Sparrow missile, it was a point defense system, capable primarily of self defense, and not area coverage.

That lack of area air defense effectively restricted Chinese operations to areas that could be covered by friendly land based air-power.

With the Type 052B, the Chinese installed the Russian SA-N-12 Grizzly Surface to Air Missile. Each ship had two single arm launchers, similar to the old US Mk13, with a total capacity of 48 missiles. For the first time, a Chinese destroyer could provide decent area air defense over a battle group or convoy. While the 052B was a big improvement, it still relied on mechanically rotated radars, and the single arm launcher system for the Grizzly SAM limited its ability to deal with saturation raids. Entering service in 2004, they were a generation behind US (and even Russian) warships which had long switched over to Vertical Launch Systems, or VLS, and phased array radar systems. The two ships of the 052B class were clearly an interim design.

Using the hull and machinery of the 052B, the next series introduced two major changes. The Type 052C introduced an Active Electronically Scanned Phased Array radar, and the HHQ-9 long range surface to air missile in a Vertical Launch System.

48 HHQ-9 SAMs in a unique vertical launch system gives the 052C a potent very long range anti-air capability. The HHQ-9 is derived from the Russian S-300 SAM system.  It’s theoretical range of 200km is overstating its capability, but it is still one of the more formidable sea based anti-aircraft missiles around.

The Chinese were pleased enough with 052C to proceed to series production, with six hulls being laid down. The need for area air defense, especially as escorts for the new Chinese aircraft carrier, meant building a credible blue water escort was important.

But there was still considerable scope for improvement. And so, even while 052C hulls are fitting out, the next iteration has been built and is being commissioned.

The Type 052D is roughly the same size at the 052C. And it too has an actively scanned array. But improvements in the cooling system have changed the appearance of the array. And rather than a VLS that can only launch the HHQ-9 SAM, the 052D has a new VLS that can, much like the US Mk41, accommodate a variety of different missile types. The 100mm gun of earlier classes has been replaced by a new 130mm design.

The 052D is the “objective” design, and is in series production, with one in commission, three others fitting out, and an additional 8 units planned, for a total of 12.

The obvious analog in the US fleet is the Flight IIA Burke class destroyer.

The Burkes are a good deal larger than the 052D, by about 2000 tons. Part of that is likely to the US tendency to build their ships for greater endurance and seakeeping. While China may seek to improve their blue water capabilities, they also are unlikely to routinely undertake the kind of world wide deployments US warships have made for the last 70 years.

While we can count gun mounts and missile cells, and look at antenna arrays, much of the capability of a modern warship is actually resident in the combat data systems, the computers that manage the weapons and sensors. And it is very difficult to draw an accurate conclusion as to their capability from the open source press.  We should avoid imbuing them with a lethality beyond what reason dictates, but we should also beware of discounting the ability of others to field technologically advanced and effective weapons.

The Chinese fleet of my youth, a collection of rustbuckets and antiques, is rapidly becoming a modern blue water, power projection fleet. They may not be our peer yet, but they’re certainly a force to contend with. 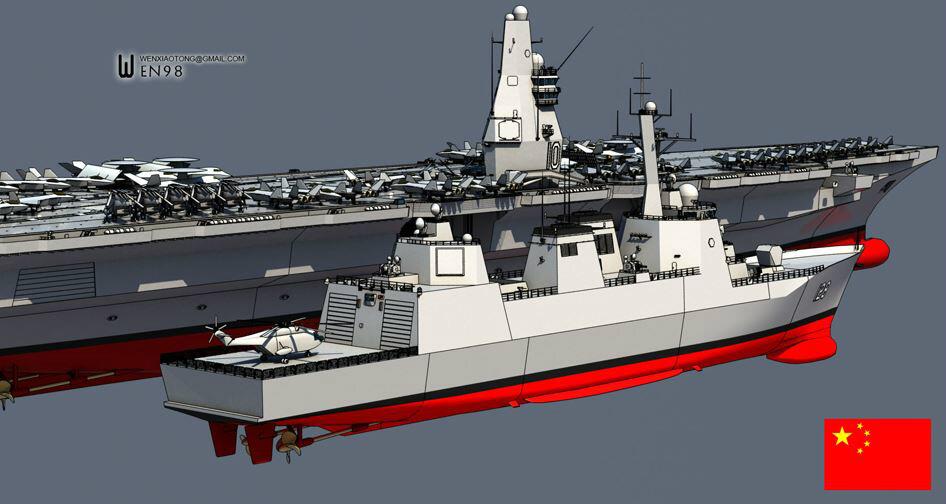 Eaglespeak has linked a report from the Naval War College on PLAN’s Anti Piracy Operations in the Gulf Of Aden in 2008. It’s your weekend reading assignment.

From the preface of No Substitute For Experience: Chinese Anti-Privacy in the Gulf of Aden:

The twenty-sixth of December 2012 marked an important date in Chinese military history—the fourth anniversary of China’s furthest and most extensive naval operations to date, the ongoing antipiracy deployments in the Gulf of Aden. In the first-ever simultaneous three-fleet public display, China’s North Sea Fleet, East Sea Fleet, and South Sea Fleet all held “open day activities.” The guided-missile destroyers Qingdao, Guangzhou, and Shenzhen and guided-missile frigate Zhoushan, together with their associated helicopters and personnel, were visited by more than eight thousand people “from all sectors of the society” at the port cities after which they are named. Over the past four years, the People’s Liberation Army Navy has deployed nearly ten thousand personnel on thirty-seven warships with twenty-eight helicopters in thirteen task forces. Over the course of more than five hundred operations, these forces have protected more than five thousand commercial vessels—Chinese and foreign in nearly equal proportion, the latter flagged by more than fifty nations. They have “successfully met and escorted, rescued and salvaged over 60 ships.” Ships saved from pirates by PLAN ships include four transports loaded with World Food Programme cargo.

If you’re a PLAN watcher you’ll want to read this and while you’re reading that, you’ll need a refresher on the newest PLAN warship classes.

Looking at the map, it’s interesting how it mirrors the voyages of Zheng He during the 15th century Ming Dynasty.