The US Navy has always maintained that international waters, and airspace, are just that, international. And that those waters and airspaces are free to the passage and use of any nation. And the US has long recognized the international standard of the 12 nautical mile limit on territorial waters.* And the Navy has long known that a right not exercised isn’t really a right. So the Navy has also long conducted Freedom of Navigation exercises, sending ships and planes into areas that we recognize as international waters or airspace, simply to make the point that they are available for use. Additionally, to maintain awareness of the maritime domain, the Navy has long used P-3, and now P-8 Maritime Patrol Aircraft (MPA) to conduct surviellance of shipping in international waters. If they can also happen to track foreign warships such as submarines while going about their business, so much the better. That’s the whole point to MPA, to patrol.

China has long felt its proper place was to be at least a regional hegemon, if not a great world power. And as such, it has long resented the US presence in the Western Pacific, particularly in the South China Sea area. And so, they have a long history of intercepting US patrol planes in international airspace. Mind you, there’s nothing wrong with that. The US does the same thing, and has done so around the world.

But the Chinese also have a history of either outright attacking US reconnaissance aircraft, or of recklessly endangering our aircraft. While it has been a relatively long time since the Chinese have actually shot down one of our planes, it hasn’t been that long since the 2001 collision between a Chinese fighter and a US EP-3E spy plane resulted in an international incident, with the EP-3 making an emergency landing in China.

And as we noted just the other day, a US Navy P-8 Poseidon on patrol in the South China Sea was aggressively intercepted by a Chinese fighter.

Pentagon officials said a Chinese fighter buzzed a P-8 Poseidon anti-submarine and reconnaissance plane on Aug. 19, at one point flying 9 meters (30 feet) from its wing tip before doing a barrel role(sic) over the top of it. 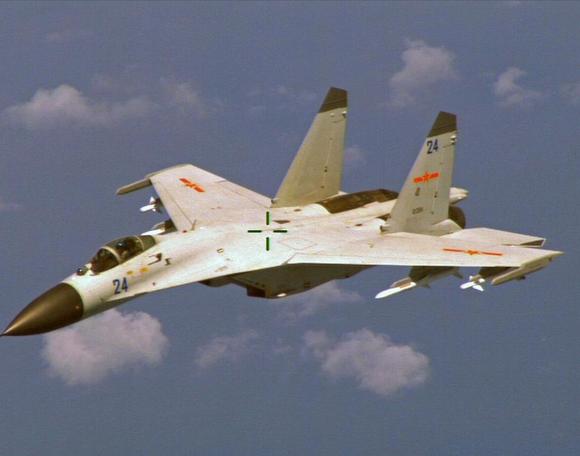 Nor is this simply a case of an exuberant pilot feeling his oats.  Because the article also shares this bit:

“We didn’t give them enough pressure (before),” Zhang said in the Global Times, a popular tabloid under the official People’s Daily newspaper that is known for its nationalist sentiments. “A knife at the throat is the only deterrence. From now on, we must fly even closer to U.S. surveillance aircraft.”

The US seems to be showing weakness everywhere on the international front, so why wouldn’t China feel emboldened to pressure the US to scale back its patrols? A strongly worded note isn’t worth the paper it is written on.

Were I in charge, I’d certainly think about providing some fighter escort for MPA flights. If they want to push, I’m fine with giving a shove back.

*The US also recognizes, as a general rule, the concept of a 200nm EEZ, or Exclusive Economic Zone, where fishing, drilling and other economic activity rights are retained exclusively by the bordering nation. Vessels and aircraft from other nations may pass through those waters, but not fish or drill.  That’s a pretty simple concept for nations like us, bordered only by Canada, Mexico, and Russia. But in the waters of nations like China, or in the Mediterranean Sea, it gets a bit more complex.

For over half a century, the P-3 Orion, an Anti-Submarine patrol plane developed from the Lockheed Electra airliner, has supported the Navy’s Maritime Patrol mission. Intended as a sub hunter, the Orion also performed surveillance of surface shipping in both open water and in the littorals, most famously in the Cuban Missile Crisis but also along the coasts of Vietnam. In the past decade, the Orion fleet has provided yeoman service providing overland Intelligence, Surveillance and Reconnaissance (ISR) in both Afghanistan and Iraq.

But the Orion fleet is aging and worn out. And so the time has come for its replacement to arrive. And so the Boeing 737 has been adapted as the P-8A Poseidon.  In development the last few years, the first few Maritime Patrol squadrons have transitioned from the P-3 to the P-8. And as of yesterday, VP-16 achieved Initial Operational Capability, and has forward deployed two Poseidons to Japan.

Still, it will take several years for the Orion community to transition. The last P-3s are currently scheduled to retire in 2019.