You should probably mute this, but play “name that plane” and spot the non-T-38 plane in the video.

That’s the WB-57F  Canberra, used by NASA for high altitude atmospheric research. It was originally used by the USAF to collect atmospheric samples during nuclear testing. Collecting samples of radioactive particles after a nuclear blast, physicists can tell a great deal about how effective a device was. We collected samples both of our own devices, and those of the Soviet Union, and indeed everyone else’s.

The WB-57 was derived from the RB-57, which was something of a poor man’s alternative to the U-2. A basic B-57 bomber was converted with vastly larger wings and upgraded powerplants to give it a much higher operational ceiling. Unfortunately, as the U-2 discovered in May of 1960, the SA-2 Guideline had an even higher ceiling.

The basic B-57 itself was built by Martin, being derived from the British English Electric Canberra bomber.

The first major variant operational with the USAF, the B-57B, served in Vietnam as a day/night interdiction/strike aircraft, and even flew some strikes against North Vietnam in the early years of the war. Increasing air defenses there meant it was soon withdrawn from use up north, but it soldiered on for a few more years providing air support in South Vietnam, eventually being replaced by newer tactical aircraft.

To find targets for those tactical aircraft meant aerial reconnaissance, and a lot of it, particularly against the NVA’s logistical trail, the Ho Chi Mihn Trail.  A lot of RF-101 Voodoo and RF-4 Phantom sorties were flown, but results, particularly at night, were less than great. And so Project Patricia Lynn was started.  A handful of RB-57Es were deployed to use infra-red cameras locate targets. It was very effective, with some estimates that 80% of the usable aerial reconnaissance came from Patricia Lynn.

The adaptability and flexibility of the B-57 also lead to a couple of experiments with using sensors such as Low Light Level Television and infrared line scanners to allow the crew to see targets at night in real time, rather than having to wait for IR film to be developed.

That impressive real time capability lead to the ugly, but impressive B-57G. With LLTV, IR and a laser rangefinder/designator built in, the B-57G was the first truly effective precision night attack jet. It was the first jet to have a built in capability to self designate targets for laser guided bombs at night. The cutting edge technology meant they were maintenance nightmares, and had poor availability rates, but when they worked, they showed just how effective night attack sensors and precision guided weapons could be. 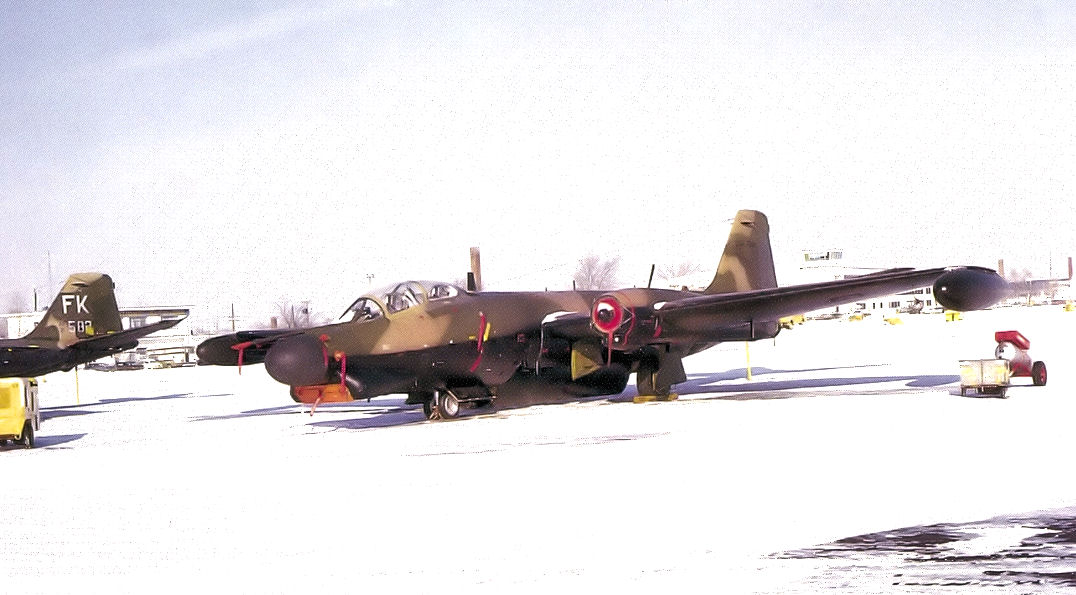 Switching back to the big wing WB-57 for a bit, let’s talk about networked warfare for a bit. More and more, we rely on datalink networks to provide a picture of the battlefield. But that raises to problems. Not all datalinks are compatible, and most are line of sight only. That lead to the development of BACN, the Battlefield Airborne Communications Node. BACN is both a relay and a translator, allowing various networks to work together. And since line of sight increases with altitude, it was first deployed aboard the WB-57, and operationally used in Afghanistan in 2012.

The WB-57s have returned to NASA, and a third has recently been added to the fleet. Not bad for a design the British first flew in 1949.

Join Roamy, Spill and me, your host, XBrad for a discussion of space exploration, the F-35 vs. the F-16, and Cyberwarfare.

Other than for some reason the recording dropping the last 10 minutes of Roamy’s segment, it mostly went well. No animals were harmed in the making of this podcast.

You can stream the podcast here.

END_OF_DOCUMENT_TOKEN_TO_BE_REPLACED

In addition to whatever the Air Force has the X-37B doing, they allowed NASA to piggy-back an experiment aboard.

NASA is also taking advantage of this X-37B flight to test how almost 100 materials react to the harsh conditions of space, like the barrage of radiation and swings of temperature the craft will experience while passing between the day and night sides of the Earth for at least 200 days.

“It’s just sitting there and letting the environment hit it,” said Miria Finckenor, a materials engineer at NASA’s Marshall Space Flight Center in Huntsville, Ala. She is the principal investigator for the experiment, which is housed in the space plane’s cargo bay.

The materials to be tested include thermal coatings to keep spacecraft components within a certain range of temperatures, clear materials under consideration for lighter windows on NASA’s Orion crew capsule and ink to make sure that markings on parts do not fade away.

NASA previously tested more than 4,000 samples outside the International Space Station, but it is difficult to carve out time during spacewalks to set up and retrieve the experiments. “This opportunity presented itself, and we just needed to take advantage of it,” Ms. Finckenor said.