First in a series here I usually do over at The Lexicans.

One of the more anticipated films.

This is exactly where I worked from 1986-2003. From 2003-2010, I was in the Hog pit. In the first few minutes of the video, they show the part of the pit that I plied my trade in. There was nothing more exhilarating, and it was a crazy way to make a living. Some of my closest friends are from here. I’d trust them with my life. It was treacherous, and raw unbridled capitalism.

via Wonder What Open Outcry Trading Was Like? | Points and Figures.

When this was filmed, I was down the street at the Chicago
Board Options Exchange. It was a similar vibe, though even then the introduction of technology was radically transforming the industry. There were times when the floor was dead, and my biggest challenge was getting the Sun-Times and the Tribune to last until the closing bell.

But when things were cooking, it was as fast paced and hectic a working environment as any, and mental agility, and an ability to remain calm amidst chaos was at a premium.

Megan Welter is not your typical pro-football cheerleader. There is no denying the sport is tough—cheerleading accounts for 60-70 percent of catastrophic injuries among female high school athletes—but this 28-year-old member of the Arizona Cardinals squad has a background not generally associated with pompoms and hot pants. She’s a United States Army veteran who served as a platoon leader in Iraq.

Welter started doing baby ballet classes when she was 3 years old and danced competitively from the age of 9. After high school, she participated on her college dance team. When she graduated in 2007, she shelved her dreams of a career in dance. “The war was going on at the time when I graduated college,” she told ABC15. “I wanted to take a job that was going to be meaningful, so I decided to join the Army.” 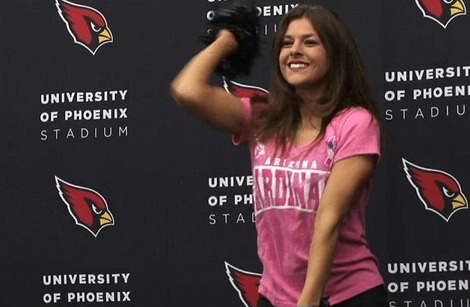 Welter completed basic training and then enrolled in Officer Training School. “I was commissioned a second lieutenant at the end of April in 2007,” she said. “And from there I became cable platoon leader and I deployed a month later from Henning Air Force base] to my unit to Iraq.”

U.S. Senator John McCain, who has railed for years against wasteful Pentagon arms programs, on Tuesday took aim at the Navy’s new Littoral Combat Ship program, urging better oversight and a pause in funding until certain concerns are lifted.

Speaking on the Senate floor, the Arizona Republican said he worried that the Navy would have bought half of a planned total of 52 of the new warships before they and their interchangeable mission packages had been fully tested and proved effective – a milestone they are not expected to reach until 2019.

McCain’s comments came a week after a critical report by congressional Government Accountability Office, and the release of an older, equally critical internal Navy study on the new ships, which are designed to patrol coastal waters while addressing threats including mines and enemy submarines.

Navy leaders last week defended the program despite a spate of technical glitches, including generator problems that cut the ship’s power at sea during a deployment in Singapore, and warned that halting funding for the ships or their equipment could drive up costs.

via Sen. McCain calls for pause in funding of U.S. Navy’s ships | Reuters.

A curious cargo airlift operation recently took place at the Daniel Oduber Quiros International Airport (LIR), in the northern province of Guanacaste. According to a news report by Alvaro Sanchez from online news daily CRHoy, nearly 24 tons of cocaine were loaded onto a United States Air Force transport aircraft. The destination of the controversial payload? Miami, a city that once held the infamous title of “Cocaine Capital of the World.”

The public affairs office of the Organization of Judicial Investigations (OIJ in Spanish) in Costa Rica explained to CRHoy that the 23 tons and 780 kilograms of powder cocaine hydrochloride were the result of two years of interdiction work by the National Coast Guard Service, the OIJ, the Border Police, and Fuerza Publica (the national police force in Costa Rica). This does not include seizures made by the U.S. Coast Guard and U.S. Navy as part of the Joint Patrol Agreement between Costa Rica and the U.S.

Not sure how much faith to place in this article. Of course, some of the ambiguity might be from translation. Or it just could be a snow job (CWIDT?).

Or, it could simply be on the up and up.

Update:  I checked with a friend at AMC, and he says he doesn’t see a flight on the manifest to CR in the last month. So who knows?

Most of us are pretty familiar with Have Donut, Have Drill and Constant Peg programs. Nowadays it’s also fairly to see MiGs or Sukhoi’s either flying around or in museums throughout the U.S. What about US military aircraft in the Soviet Union during the Cold War?

Searching around the interwebs doesn’t reveal much but here I’ve started with a photo in the Winter 2002 issue of International Air Power Review.

This is a photo of what may be an F-4 Phantom and a Mirage III (with an 3M bomber in the foreground) taken at the Zhukovskiy airfield outside of Moscow. The caption dates the photo 11 August 1971.

Zhukovskiy was the Soviet Union’s equivalent to the USAF’s Edwards, AFB and as such numerous types of aircraft underwent evaluation there. The Phantom in the picture appears to be covered with a protective canvas cover. The nose shape is reminiscent of the YF4H-1 prototypes. I don’t think this is a flyable model and may be a mockup with pieces of actual Phantoms shot down over North Vietnam and aircraft lost in the Middle East wars. The Mirage III also looks like a mockup and include pieces of actual Mirages lost in various Middle East wars.

The Israeli Air Force was the only user of both aircraft at the time.

Some other interwebs searching reveals some interesting finds at the Moscow Aviation Institute.

This is a fuselage from a Northrop F-5. This is probably one of the 2 Skoshi Tiger aircraft formerly operated by the Air Force of South Vietnam. This is 1 of 2 F-5s transferred to Soviet soon after the Communist North invaded in 1973.

This is an escape capsule from an F-111 that was shot down over North Vietnam. The USAF lost 6 of these aircraft during the Vietnam.

This is a piece from an A-7A from VA-83 Marauders. I was unable to find the aircraft this piece belonged to.

This is the vertical stabilizer from Scott O’Grady’s F-16C shot down over Bosnia in 1995. These and other pieces of western military aircraft were used by Soviet/Russian experts to examine Western aircraft construction techniques.

Unlike the Constant Peg program, it’s unknown what if any flight evaluations the USSR made of these for any other Western/US aircraft.

There are also rumors of Iranian F-14 Tomcats (along with the aircraft’s AIM-54 Phoenix AAM) and a few F-4Es and F-5 being brought to the Soviet Union for evaluations. Again these are just rumors.