Your humble host has a serious case of the “blahs” today. I can’t even find a good pic of a kitten to link. I’m going back to bed.

“Press This” has eaten my post twice, so let’s hope for third time lucky.

The SpaceX Dragon capsule was undocked and released from the International Space Station early this morning.  The de-orbit burn should happen at 10:51 a.m. Eastern time, and the capsule should splashdown in the Pacific Ocean west of Baja California at 11:44 a.m., about 490 nautical miles southwest of Los Angeles.  A news briefing will be held jointly from Johnson and SpaceX in Hawthorne, Calif., at 2 p.m. live on NASA TV.

After retrieval, the capsule will be brought to McGregor, Texas for unloading and inspection.  Dragon is different from other resupply vehicles, such as the Russian Progress, which are allowed to burn up on re-entry.  Dragon has a heatshield made of PICA-X, which is a variant of the Phenolic Impregnated Carbon Ablator used successfully on the Stardust mission.  I’m hoping everything goes as well with this mission as it did for the first demo mission back in December 2010, where the heatshield worked well, and the capsule landed on target.

The life of a frigate sailor in the U.S. Navy doesn’t look much like what you see in the recruiting commercials.

As described by Navy Times’ senior writer Mark D. Faram, the crew of the frigate USS Elrod struggles constantly with breakdowns, old equipment and the limitations of a ship deliberately left out of combat relevance in the 21st century.

Plus sailors’ accommodations are cramped. Their clothes come back damp and wrinkled from the central laundry. Sometimes they shower without hot water for weeks.

The frigates, in short, are the self-described “Ghetto Navy,” the part of the surface force that makes the rest of the surface force — which has had its own maintenance, training and readiness problems — look good. But in the true spirit of the service, the crew has to look on the bright side. Everyone, starting with the ships’ chiefs, treats her or his time aboard as an experience that, as Calvin’s father might have put it, “builds character.”

via DoD Buzz | Life at sea with the ‘Ghetto Navy’.

The “Figs” were built with a very specific purpose in mind. Open ocean escort of merchant shipping, amphibious shipping, and underway replenishment groups.  They were optimized for Anti-Sub warfare, with a significant secondary capability for Anti-Air Warfare and limited Anti-Surface Warfare. That is, they were balanced, well rounded ships. Hence their adaptability to a wide variety of roles and missions. They were specifically NOT intended to sail as part of a Carrier Battlegroup (though shortages in other ships meant they often did fill that role).

They were among the first ships “designed to cost” with the capabilities and growth potential of the class sacrificed in order to keep the unit cost as low as possible, thus permitting large numbers to be bought. But that approach meant that when the main battery, the Mk13 Guided Missile Launcher System became prohibitively expensive to maintain, removing it without replacement was the only viable option. The Navy could have upgraded the Figs in a manner similar to what the Australians have done with theirs. But the costs involved would eat into budget dollars that are now going to buy LCS, DDG-51 and other hulls. I personally think that was a shortsighted choice.

But the simple math is, the Figs are old. They’ve earned their retirement. Too bad they don’t have a real replacement.

The $1.7 billion Armored Multi-Purpose Vehicle (AMPV) program is the Army’s blandly named initiative to replace the M113, an all-too-lightly armored transport — sometimes called a “battle taxi” — that first entered service in 1961. Over 3,000 M113 variants serve in a host of unglamorous but essential roles from troop carriers to armored ambulances to mobile command posts.

The folks in the Huey community used to joke that when the last Blackhawk is dropped off at the boneyard, the crew would catch a ride home on a Huey.

Pretty much the same thing can be said for the M113.  To say it has been a successful vehicle is a bit of an understatement. More M113s have been built than any other post war Western armored vehicle.

That’s not to say the vehicle doesn’t have its faults. It does. But any replacement vehicle will cost more to buy, be heavier, and cost more to operate.  That’s just the nature of improvements in armored vehicles. It may well be a good investment to look for  a replacement (and the proposed stripped down Bradley chassis is the common sense approach).

As long as the Army looks for a modest improvement, and not some transformational approach, a good vehicle shouldn’t be out of reach.

Just a little shooty to start your day.

On New Year’s Eve in 1984, a small group of U.S. soldiers decided to exploit the Soviet weakness for drunken revelry to get as close as they could to a T-80 tank in East Germany. The men weren’t out on their own inebriated lark–they were part of a top-secret mission behind the Iron Curtain. A reporter once claimed that an Army major, Arthur Nicholson, was among them, though former colleagues insist he wasn’t. It hardly matters. The result was an intelligence coup for the U.S., as one of the soldiers not only observed the Soviet tank but also sneaked inside and photographed its interior. Nicholson certainly knew about the operation, even if he wasn’t directly involved. Within three months, however, he would be dead–very possibly as the victim of Soviet retaliation.

Just about every time we left the garrison, we were briefed on the Soviet Military Liaison Mission.   The basic rule of thumb was they could look but not touch. As long as they didn’t physically interfere with our operations, we were to ignore them (but report them to higher). But if they touched…

There was a popular story about a SMLM officer who hopped up to take a look in the back of a 5-ton truck stopped momentarily at the side of the road. As soon as he lifted the back canvas flap, the Sergeant in back butt stroked him in the face with his rifle.

I’ll be away from the interwebs until this afternoon. And I was way too lazy to schedule content for today. Play amongst yourselves.

Can’t get these to upload at Facechimp, so I’m posting them here. Craig, feel free to steal them from the SkyDrive and use them as you wish.

The fighting men and women of the United States have conducted themselves with a gallantry matched by no other force in history. It cost them. The bill is written upon folded flags, and presented to wives, husbands, and children in every quarter of America. Bless them, each and every one, and let us remember the names and faces they will never forget.

via Memorial Day: Every life given, not all returned – HUMAN EVENTS.

Read the whole thing by DocZero.

As a follow up to the blurb I posted the other day about the USS Iowa moving from San Fran to San Pedro, Craig pointed me to Of Battlefields and Bibliophiles, where in addition to pics of the old girl being towed, he’s managed to include wonderful shots of the Golden Gate Bridge at 75 years, and Civil War Era fortifications! That’s an impressive trifecta of content for one blogpost. 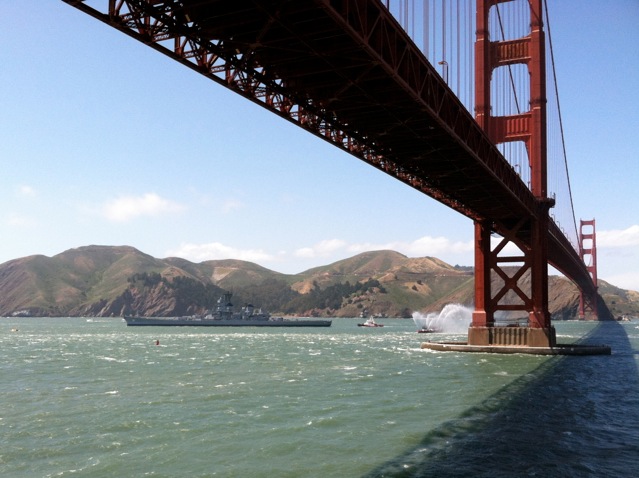