The long ranges typical of engagements in Afghanistan have caused a renewal of interest in sniping in the Army. During most of the Cold War era, with its focus on mechanized warfare in Western Europe, it was very low priority. After all, snipers are of very limited value against a tank regiment charging across a valley. But in a small unit firefight between light infantry in the hills of Afghanistan, the ability to selectively target and kill insurgents, often hiding among civilians, is a great asset. On problem the Army has had is that the ranges in Afghanistan are often so great that its current crop of sniper rifles struggled to reach that far with any consistent accuracy. The 7.62x51mm NATO round can reach about 800m over level terrain. That’s great. But when the Taliban is way up on a ridgeline 900m away shooting down on your position, you need something with a little more oomph.

I’ve mentioned before that the Army has been looking at upgrading its standard sniper rifle, the M24, up from 7.62mm to the .300Winchester Magnum. See also, here. Well, the new rifle is the XM2010. And it isn’t really so much an upgrade, as a rebuild. When the Army first bought its M24s, they paid just a bit extra to get the receiver in the long format, not the short. This was unnecessary for the 7.62mm, but it did give the Army the option of upgrading the rifles to .300MG.  Finally, that time has come. But the Army isn’t just switching out the bolt and barrel. In fact, according to The Firearms Blog, pretty much the only thing being retained is the receiver itself and the trigger group.

Our British cousins have adopted an even larger round, the .338 Lapua for their sniper rifles. That round is pretty much the gold standard for long distance sniping. But the .300WM is nothing to sneeze at. And by rebuilding the rifle actions already in hand, rather than having to go through the headache of procuring an entirely new system, the Army has been able to field this system relatively quickly. USA Today has an article today about the new system:

The Army is shipping powerful new rifles to its snipers in Afghanistan to kill insurgents who are firing from greater distances and shooting at troops more frequently than in the early years of the war.

The XM2010 sniper rifle can hit a target 3,937 feet away, which is a quarter-mile farther than the current Army sniper rifle shoots.

The added distance is important because insurgents have been shooting down from ridges and mountaintops where gravity helps their bullets travel farther and beyond the range of Army snipers.

“They’re not outgunning us, but they are putting our soldiers in a predicament where 800 meters (2,625 feet) may not be enough,” said Col. Douglas Tamilio, referring to the maximum range of the current M24 sniper rifle.

“Because of the expanse, you can see so far and you can engage so far,” Tamilio said. “You want to give guys the capability to do those things they need to do at those ranges.” 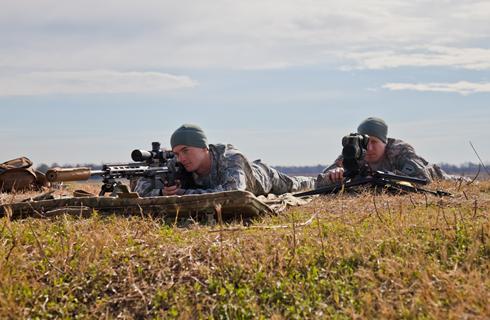