So I flipped on KCAL 9’s news to see the familiar green/gold paint job of a Los Angeles County Sheriff’s Department helicopter conducting a SAR mission near Pasadena. But instead of the familiar surplus SH-3H Sea King, I was surprised to see an AS332 Super Puma. 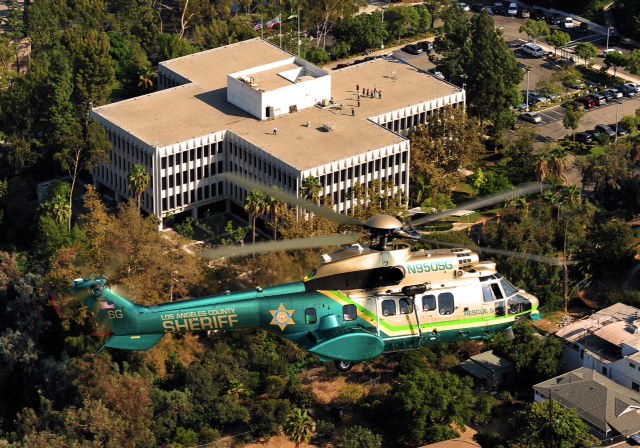 On Wednesday, October 3, 2012 in Long Beach the Los Angeles County Sheriff’s Department Aero Bureau held a press conference to unveil the new Super Puma Helicopters.
The County of Los Angeles recently approved the acquisition of three previously owned Eurocopter AS 332L1 Super Puma helicopters by the L.A. County Sheriff’s Department (LASD) Aero Bureau. These ships will replace the aging former United States Navy Sikorsky SH-3H Sea Kings currently operated by Sheriff’s Aero Bureau.
With parts and support for the three H-3’s becoming more expensive and difficult to obtain, the decision was made to replace them. The three AS 332L1’s that LASD is obtaining will continue the long tradition of the Department’s Air Rescue-5 program.

Anybody know who the original operator was?

By the way, the US Navy has a couple Pumas under contract to conduct Vertical Replenishment from some of its logistics ships.

And the hikers the LASD picked up today? Looks like they’re safe and sound.