That is, Command and Control of Man Portable Air Defense Systems.

This article on the new Russian “Verba” system has been making the rounds in a couple facebook groups I’m in.

“The surface to air-missile regiment of the Ivankvsky Airborne Forces division is the first to have started receiving and studying the modern system of air defense battle,” Meshkov said.

The systems automatically provide information on the air environment, fix the target and command a strike against the target within several seconds. “This gives time to an AA sniper armed with the Verba MANPADS to prepare for the meeting and hit the target beforehand,” he said.

It’s actually unclear if Verba is a new missile, or just refers to the Command and Control system for existing shoulder fired anti-aircraft missiles, such as th SA-24/9K338 Igla-S.

Most of us have seen pictures and videos of shoulder launched missiles, especially the US FIM-92 Stinger. What you probably didn’t know is that there has long been a method of centralized control over the fires of Stinger teams and its predecessors, the Redeye missile, and earlier Vulcan guns and Chaparral missile launchers.

The relatively short range of such systems and high approach speeds of enemy aircraft, coupled with the need to avoid shooting down friendly air support, means that teams in the field had to be provided with as much warning as possible of the presence of enemy aircraft. Voice radio is one option, but it is slow, and a surprisingly difficult way of sharing information. Instead, from the 1960s on, the US used a primitive data link system to share radar information with air defense teams in the field.

Under the ROAD/Division86/AoE2000 organization, each division had an Air Defense Artillery Battalion. Its structure varied over time, and depending on what type of division it was organic to. But for our purposes, let’s just consider that it was armed simply with Stinger teams mounted on Humvees. The ADA battalion was responsible for short range air defense of critical divisional assets (such as the division’s CP and artillery) as well as the maneuver forces in the field. Information about air operations in the division’s area could be provided by outside resources such as higher echelons of the Army, or even by Air Force assets. But the primary means was through the ADA battalion’s own organic search radar.

Up until 1991, the division used six MPQ-49 Forward Area Alerting Radars (FAAR) to cover the division area. The FAAR was a short range, mast mounted radar moved by a light truck. With a range of about 20km, it was optimized to detect low flying targets, such as ground attack aircraft and helicopters. 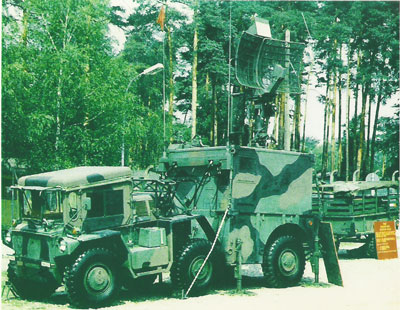 But just having the radar to cover the divisional area wasn’t enough. The information from the radar had to be disseminated to the Stinger teams dispersed throughout the area.

To automatically (and continuously) provide that information, the FAAR was linked to a small man-portable box via a primitive radio datalink. This box was the TADDS or Target Alert Data Display Set.

The TADDS wasn’t very sophisticated (or precise) but it did give a crude overview of the air situation to Stinger teams in the field. Coupled with voice radio from the battery commander, and judgment of the Stinger team leader on the spot, relatively effective command and control was possible. Mind you, the MPQ-49FAAR/TADDS system was phased out of service in 1991 in favor of more sophisticated radars and displays.

So maybe the Russian airborne forces do have a new command and control system for their MANPADS air defense. But it’s hardly the first in the world.