As the US Navy developed doctrine for amphibious operations in World War II, one thing it quickly learned was that there simply was never enough suppressive firepower available.  The most famous pre-landing bombardment ships were the  battleships, of course, with their massive 14” and 16” guns pummeling suspected positions for hours, even days before a landing. Of course, cruisers and destroyers hurled tens of thousands of shells upon beaches as well. And we’ve written about the smaller ships such as the LCS(L)(3) series.

When it comes to suppressive fires, quantity has a quality all its own. But naval guns are heavy, expensive pieces of equipment. And so, early on, the Navy turned to the humble rocket as a way to quickly boost its firepower. The first rockets in widespread use was the 4.5” Beach Barrage Rocket, or BBR.

A simple solid rocket motor on the back end of a 20 pound warhead, the BBR was fired from a simple metal rack. It had a very modest range of about 1100 yards, and wasn’t terribly accurate. But it could be carried in large numbers by even the smallest of ships and craft.

The BBR made its combat debut during the Torch landings in North Africa, and saw extensive use throughout the war. The Navy was generally happy with this simple weapon, but also wanted something with longer range, on the order of 5000 yards, or even 10,000 yards.

Rockets launched from the ground, and using fins for stabilization, are inherently somewhat inaccurate. While the wide dispersion of the BBR was tolerable given its maximum range, a rocket for longer range use would have to be more accurate. And so, the Navy tasked CalTech to develop a spin stabilized rocket. After initial efforts looking at a 3.5” rocket, CalTech soon developed a family of 5” rockets that were spin stabilized by slightly canting the exhaust nozzles of the rocket motor. A variety of warheads were available, such as smoke and illumination, but the two most used were “common” shells with high explosive warheads, one with a range of 5000 yards, and one with a smaller charge, but a range of 10,000 yards.

Among the first ships equipped with the 5” High Velocity Spinner Rocket (HVSR) were PT boats. The Mk 50 launcher could be installed port and starboard aboard a PT just forward of the charthouse. Stored position had them inboard.

But for firing, they were traversed outboard, so the blast would not impact the relatively fragile wooden decks. 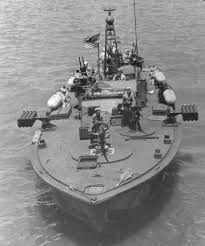 The Mk 50 was fixed in train- that is, the only fired straight ahead. It was, however, fitted for elevation. Varying the elevation of the launcher determined the range of the shot.  Aiming was via a reflector gunsight at the helm. Mind you, a bobbing 80 foot boat wasn’t the most stable platform, but the rockets added considerable firepower to boats that already punched above their weight.

The biggest users of the 5” HVSR were the LMSRs, or Landing Ship, Medium, Rocket. The LSM, widely used in the Pacific in the second half of the war, was adapted to carry hundreds of rockets. Early iterations used 5” aircraft rockets on dozens of four rail launchers. Later versions used the 5” HVSR. But the penultimate rocket ship was an LMSR with the Mk 102 automatic rocket launcher.

The Mk 102 was derived from the powered twin mount Bofors 40mm. A handling room directly below the mount fed rockets to the launcher. The 8 or 10 launchers on an LMSR were directed from a central gun director on the pilothouse.

The Navy was quite pleased with these ships, and kept them in reserve after World War II. They would see further service, even into the Vietnam war.

These ships were, however, wartime expedients, and suffered from some compromises that the Navy sought to overcome. For one thing, their magazines were above the waterline, and thus terribly vulnerable, as the ships were essentially unarmored. Further, the beaching hull meant that their top speed was quite limited. Of course, with a fleet of dozens of newly built LSMRs in reserve, and the war over, there simply wasn’t any money to design a better ship. But the Korean War changed that, making money quite available for a prototype. Laid down in 1952, the ultimate rocket ship wouldn’t be finished in time for that war. But the USS Carronade (IFS-1) would go on to serve in Vietnam for nearly four years. Armed with the slightly improved Mk 105 automatic rocket launcher, she and a handful of recommissioned LSMRs would provide call-fires and pre-planned fire support

Of course, no discussion on naval barrage rocketry would be complete without at least a passing mention  of our national anthem. The Star Spangled Banner’s line about “…the rocket’s red glare…” refers to the Congreve rocket, used by the Royal Navy during its bombardment of Ft. McHenry.

Israel is facing barrages of rockets from Hamas. This is hardly a new phenomenon. But the recent upswing in violence after the kidnapping and murder of three Israeli teens (one of whom was an American citizen) has led to large barrages of crude rockets fired from the Gaza Strip into virtually every city in southern Israel.

In spite of the man critics who insist that no form of missile defense is possible, the Israelis in 2011 fielded the Iron Dome anti-missile system. Iron Dome is a “point defense” system, designed to shoot down battlefield type artillery rockets in defense of a single “point” rather than a wide area. Mind you, “point” in military terms means, say, a single city, as opposed to a wider region. Iron Dome racked up impressive success last year. And so far, under this current bombardment, it is having about 90% success rate.

You’ll notice the first two segments show fairly large barrages, and Iron Dome is engaging them at very short range, with multiple missiles guiding simultaneously. That’s a pretty impressive capability.  The battery has to acquire the rocket, discriminate that it really is a rocket, plot its trajectory, and make a decision whether to engage or not (no sense shooting if the rocket will simply land in the desert). And it has to do this automatically, in seconds, day or night, good weather or bad, and do it for multiple targets simultaneously.  And the warhead has to be effective at not just striking the rocket body, but must reliably detonate the incoming warhead.

Iron Dome was developed by Israel, but the US has funded procurement of additional firing batteries and interceptor missiles.

By the way, the plotting of the ballistic path of the incoming rockets to determine the likely point of impact also works the other way, plotting the launching point. The Israelis are pretty good at pouncing on the Hamas teams launching rockets.

Iron Dome is also capable of intercepting low to medium altitude aircraft, but it is not suitable for intercepting missiles such as the SCUD or other medium range ballistic missiles. Still, it’s an impressive capability, and to date, only three Israelis have been killed by rocket fire while under the protection of an Iron Dome battery.

When the Marines defend their huge investment in Close Air Support, it’s largely because they need it. They simply don’t have a lot of tube artillery available for support. Why? Because they will never have enough amphibious shipping to move it.

The Army, on the other hand, has since the middle of the 19th Century had a long tradition of excellence in artillery, and accordingly places a lot of faith in a lot of guns.

Let’s compare some of the fire support available to a division. Organic to the Marine division is an artillery regiment. In the late 1980s and early 1990s, this regiment had three battalions of light artillery, 105mm tubes, and one battalion of 155mm artillery. All four battalions had towed pieces.

At first glance, Army artillery seems quite comparable.  A light division had “Division Artillery”~ effectively a brigade, with three battalions of 105mm guns, and one battalion of 155mm guns, all towed.   Seems pretty comparable.

But if we leave the light divisions, and look at the Army’s heavy divisions, we see a somewhat more robust organization. Each mechanized or armored division had a similar organization, but different armament.

But the story doesn’t end there. Army divisions in Europe were intended to fight as a part of a corps, and indeed, as a part of a field army. And a great deal of the combat power of a corps or field army is located in units outside of the divisions. Each heavy corps typically had two separate artillery brigades, each with four battalions, usually three of 155mm and one battalion of MLRS, as they phased out the 8” tubes.

One of the key precepts behind US Army artillery doctrine has always been concentration. If it’s worth shooting at, it’s worth shooting at a lot. So it would be typical for the main effort of a corps operation to receive the support of both corps artillery brigades. And within that main effort  division, it would be typical for the maneuver brigade forming the main effort to receive the support of all the guns of both the division and the corps artillery, or at least a priority claim to their fires.* Conceivably, one maneuver brigade of three battalions would have the support of 12, or even more, battalions of artillery. That’s a level of fire support a Marine regiment commander could only dream of. And that doesn’t count the attack helicopter and Air Force tac air support our notional Army brigade might receive.  And because all these heavy artillery brigades were self-propelled, they could rapidly shift support from one area to another.

With the collapse of the Soviet Union, the Army no longer faces the spectre of a single division having to stem the onslaught of an entire Russian tank army. And the past decade of limited warfare in Iraq and Afghanistan has seen a much smaller need for massed artillery fires.

Instead, today’s artillery has shifted emphasis from massing fires to longer ranges and greater precision, via such tools as rocket assisted projectiles, guided unitary warhead MLRS rockets, and guidance kits for conventional 155mm artillery that permits a limited “boost/glide” profile.  The battlefield a single maneuver brigade occupies is much larger than in years past, even as little as 20 years ago. And simply to cover that area, the supporting artillery either needs a longer range, or the greater lethality of guided rounds (that way, smaller units of artillery, such as a battery or even just a platoon can disperse over a wider area to support more units and cover more battlespace).

The good folks at NOSINT bring us news that the Guided MLRS rocket now has a range of 85 kilometers, instead of the old 70km range.

That’s about 53 miles. That means from central Orange county, I can put a round through a window in Santa Monica.

Originally, the MLRS (Multiple Launch Rocket System) was a “shotgun” the division or corps commander could use to blanket an enemy artillery battery or tank formation with many thousands of bomblets. It was used to great effect in this role during Desert Storm.

Now, in an urban setting, dropping hundreds or thousands of bomblets is considered bad form. Also, since the insurgents are often hiding in buildings, a bigger warhead is needed. While the GMLRS doesn’t have the punch of a 500 or 2000 pound laser guided bomb, it is often quicker to get a round on target than working a request for air support through the chain of command. The smaller warhead also reduces collateral damage.