H/T to Fringe for suggesting Maggie, who played Liam Neeson’s daughter in the Taken movies.

Who didn’t love her on Justified?

Everybody knows and loves the GAU-8 30mm cannon mounted on the mighty A-10 Warthog. Fewer folks are aware of it’s little cousin, the GAU-12 25mm rotary cannon.  Primarily used by the Marine Corps AV-8B fleet, its five barrels give it a rate of fire of 3600 rounds per minute, with a maximum rate possible of 4200 rpm. The ammo pod only carries 300 rounds, so y0u only get a short burst. The GAU-12 is also part of the armament of the mighty AC-130U Spooky gunship, though its rate of fire in the application is only 1800 rpm.

The Marines also fielded an air defense varia[youtube https://www.youtube.com/watch?v=irn_74oXfUg]nt of their Light Armored Vehicle (LAV) fleet, the LAV-AD that mounted a GAU-12, but withdrew it from service as the recoil from the gun was pretty much shaking the vehicles to pieces.

An updated, four barreled verison, the GAU-22A, will serve as the gun armament for the F-35 Lightning II. The Air Force F-35A’s mount the gun internally, while the Marine Corps F-35B and Navy F-35C will have an option to carry a podded version.

While the video focuses on the armor piercing incendiary round, in reality, most of the time, the gun uses a High Explosive Incendiary round, and in spite of impressive accuracy, is used for suppressive fire as an area weapon.

With only a handful of minor roles to her credit, beginning in 2012, 6’3” actress Gwendoline Christie snagged high profile roles in Mockingjay, Game of Thrones, and Star Wars: The Force Awakens, and much more in is the pipeline.

I remember Nadine from My Name is Earl. What I mostly admire about her acting chops is her ability to be photographed often, and in bikinis a lot.

You’ve just starred in the movie with the biggest 4 day weekend opening gross in history. How do you top that?

You appear in Load HEAT!

I haven’t seen it yet, so no spoilers.

I enjoy her early work. And she’s certainly got a way with fashion.

And it wouldn’t be complete without the infamous meat dress.

The Naval Act of 1916, even before the US entry into World War I, called for a massive expansion of the US Navy. Among other things, it authorized a class of fast battlecruisers, of 33 knots, armed with eight 16” rifles.

After the ghastly costs and human tragedy of World War I, however, the United States and other nations saw an  arms race in naval armaments as provocative, and prohibitively expensive. And so the Washington Naval Treaty of 1922 imposed limits on capital ship construction. The fast battlecruisers would not be built. The treaty imposed a moratorium on battleship and battlecruiser production. But it did allow some aircraft carrier construction, within certain tonnage limits.*

Already about a quarter complete, the prospective battlecruisers Lexington and Saratoga were instead completed as fleet aircraft carriers. Their 16” turrets and barbettes were removed, and a flight deck built instead.  But early in the development of carriers, since night and foul weather air operations were virtually impossible, it was thought that carriers needed strong self defense against enemy surface ships. Accordingly, Lexington and Saratoga received an armament of four twin 8” gunhouses, roughly similar to that of a contemporary heavy cruiser. The gunhouses were arrayed for an aft of the massive island along the starboard deck edge.

Experience in the interwar years, and the early months of World War II showed that the carriers would virtually always be escorted by heavy cruisers anyway, and that the primary threat to carriers would be aircraft. Further, the massive muzzle blast of the 8” guns mean they could not really be trained to port without damaging the flight deck, and of course, any aircraft on it.

And so, the Navy decided that at the earliest opportunity, the 8” gunhouses would be replaced by a similar number of twin 5”/38 dual purpose guns.  Both Lexington and Saratoga had their 8” guns removed in the early months of 1942 at Pearl Harbor.

One of the things that surprised both the Army and the Navy after the devastating raid on Pearl Harbor on December 7, 1941, was that the Japanese didn’t follow up the raid with a bombardment of shore based installations by a battleship or cruiser force.  The coast defense of Hawaii was decent, but by no means impregnable.  And the possibility that that Japanese might return to strike again was not to be dismissed.

So early 1942 saw Hawaii with eight 8” gunhouses. The Army typically developed its own series of coast defense guns. But they weren’t about to look a gift horse in the mouth. There are three militarily significant harbors on Oahu- Honolulu, Pearl Harbor, and Kanehoe Bay. Each was already defended to some extent by Endicott/Taft period fortifications, and plans were in hand to install newer Army designed batteries. But the availability of surplus 8” guns meant the Army could rather quickly install even more batteries. Each harbor would receive some of the surplus gunhouses.

A typical battery was two twin gunhouses, each mounted atop a concrete tunnel that linked in a “Y” shape to its own shot and powder rooms, with a power generator, and a battery control post in the middle. A fire control radar was also supplied, usually disguised as a water tower. Construction of the batteries took about a year, by which time, the threat was mostly past.

Of course, bureaucratic inertia meant that the batteries were manned and on alert almost to the end of the war.

And these weren’t the only surplus naval guns used in Hawaii coast defense.

When the USS Arizona was spectacularly destroyed during the raid on Pearl Harbor, two of its turrets was completely destroyed. The other two, however, were almost completely intact.  And since the ship itself could not be salvaged,** the turrets were slated to be similarly utilized as coast defense batteries in shore emplacements.

Of course, moving a lightly armored twin 8” gunhouse is a lot easier than moving the several hundred tons of a fully armored triple 14” turret. Construction began in 1943 while salvage operations at Battleship Row were still underway. Eventually, Battery Arizona and Battery Pennsylvania each received one turret, and work was almost complete when the effort was suspended on the first of August, 1945, by which time the threat was obviously gone, and coast artillery was clearly obsolete. 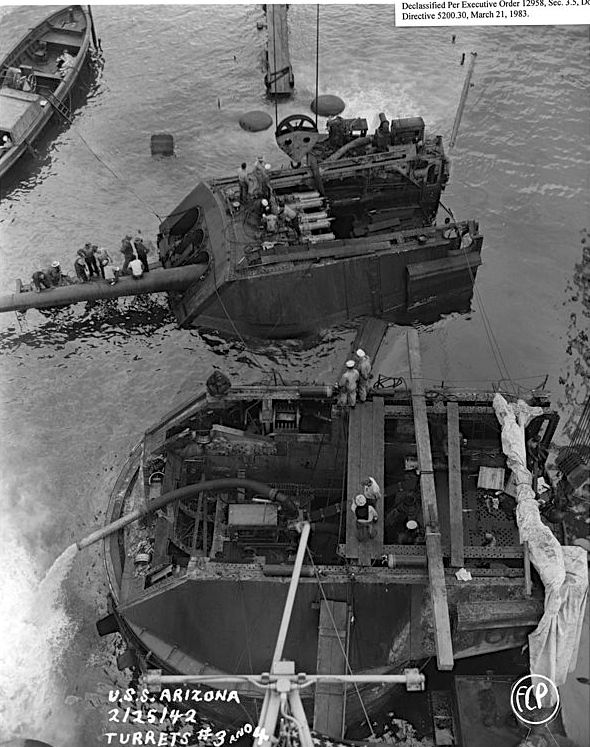 Images and information courtesy of the excellent Fort Wiki.

*We often hear that it took Pearl Harbor for the carrier advocates to come to the forefront. But looking at the WNT a mere 3 years after the introduction of the first carrier tells us that naval strategists clearly saw that naval aviation would rise to the level of capitol ship very quickly.

Recall of course that Britain was under nearly continuous air attack for much of the war. That meant a much larger investment in fixed and semi-fixed batteries than the US made. The mount shown appears to be the Vickers 4.5” QF gun, itself an adaptation of a dual purpose naval gun. The predictor appears to be the Vickers Type 10. The narrative alludes to radar, but for security reasons, doesn’t specify it.

Interestingly, while the 4.5” QF was an excellent gun, it began the war with rather sub-par ammunition. The Type 199 had an igniferous time fuse. That is, a burning powder train was used for the time delay. But since altitude effects burn rate, it was a less than wholly satisfactory fuse. A later mechanical time fuse and fuse setter were adopted as soon as possible. Oddly, it doesn’t appear a VT proximity fuse was ever adopted for the 4.5” QF, though VT fuses were used in other similar British AAA guns.

The US and most other nations pretty much abandoned AAA guns as soon as guided missiles became available in the 1950s.

The Russians and their client states, however, did not. I was chatting with a friend about this, and since whenever I go to the effort of writing, I think you should benefit, here’s part of the conversation:

The commies sure loved them LOTS of AA guns. I mean, LOTS.

Why the affinity for them?

They’re relatively cheap. And quite effective. Look at airplane losses in Vietnam, guns were far and away deadlier than SAMs.

I’d have to double check, but I think guns even took down more planes in Desert Storm than missiles.*

Lots of medium caliber guns (23-57mm) effectively deny the airspace below 10,000ft. Which incidentally means you’re pushed into the prime SAM engagement envelope. Which, you then have to spend a good part of the initial air campaign suppressing the SAM systems, and not striking the targets you want.

The first two nights of Desert Storm, the Navy and AF and RAF used low level tactics to avoid SAMs. And the losses were quite heavy. And virtually all to guns. They switched to medium altitude after that, reasoning it was easier to jam, suppress and avoid SAMs than to give up a $40 million jet to a cheap ass gun.

*Our friend Robin has an analysis of lost and damaged coalition aircraft in Desert Storm.