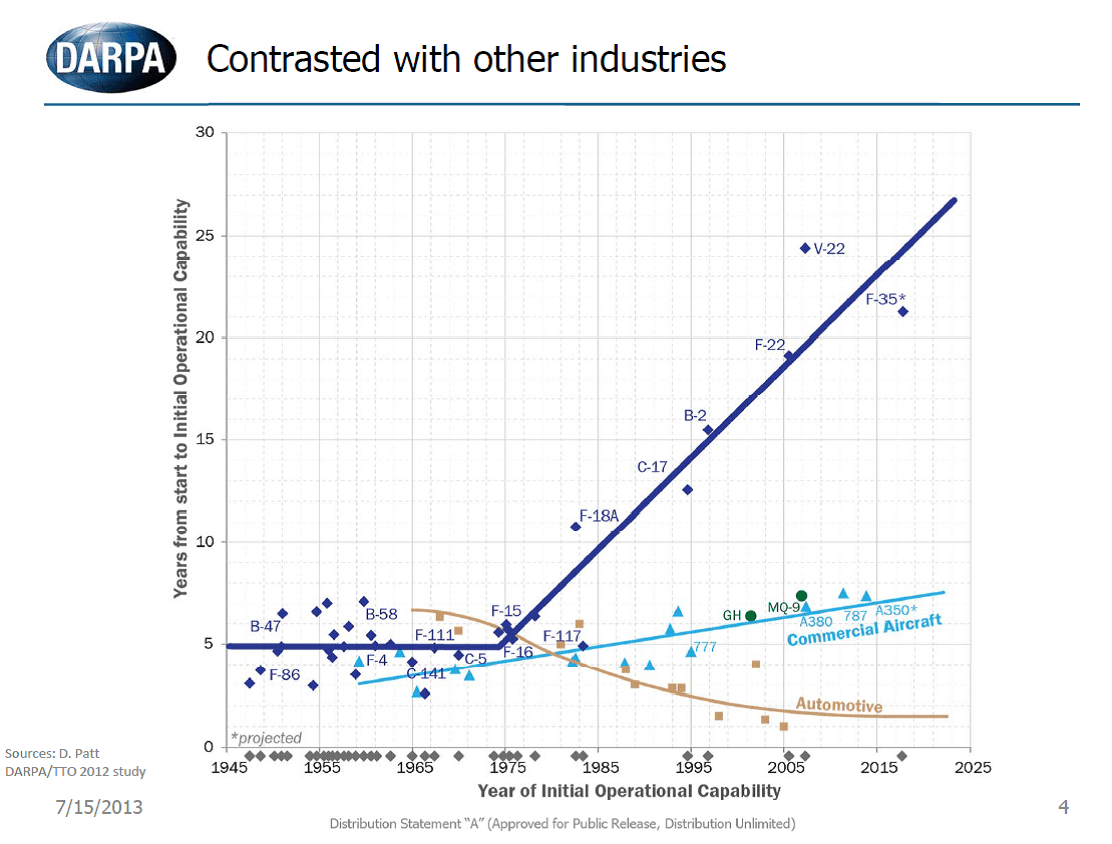 One of the key innovations of the Littoral Combat Ship Program was to be a series of plug-and-play modules that would tailor the ship’s capabilities to a given mission. Much as adding pods and armament to an airframe can change an airplane mission set, the goal was to have a bare bones seaframe that could accept modules that would fulfill one of three common surface warfare missions- Anti-Mine Warfare (MiW or MCM for Mine Counter Measures), Anti-Surface Warfare (ASuW) or Anti-Submarine Warfare (ASW).  The concept of operations originally called for these modules, and the specialist crews for them, to be forward deployed to advanced bases. Modules and personnel  for one mission would be swapped out for the modules and crew of another in as little as 24 hours. Alas, certain programmatic failures have precluded that from happening, but the basic idea of mission tailored modules endures.

In a smart program management world, the PM would have noted that virtually every module set includes new, untried technologies still early in development. And the smart PM would have developed prototypes of each component for each module, and then sent those prototypes to sea on existing platforms, such as Perry-class FFGs, or Burke-class DDGs to identify strengths and weaknesses, as well as previously unforeseen challenges. Having prototyped and tested the components, prototype modules could then have been sent to sea for a similar evaluation.  Having developed a level of technical maturity, the PM could then have solicited designs for the ships optimized to carry and employ these modular weapon sets.

But that’s not what happened in the LCS program. Instead, the Navy laid down very ambitious (and largely unjustified) requirements for what the seaframes could do, and set aside seemingly arbitrary requirements for power, cooling and space for modules, which the PM office seemed to simply assume would proceed through development with no major issues.

We’ve written enough times about the LCS seaframes themselves (and likely will do so again). But we’ve paid scant attention to the development of the modules that will (in theory) make the LCS more than an overly large patrol boat. 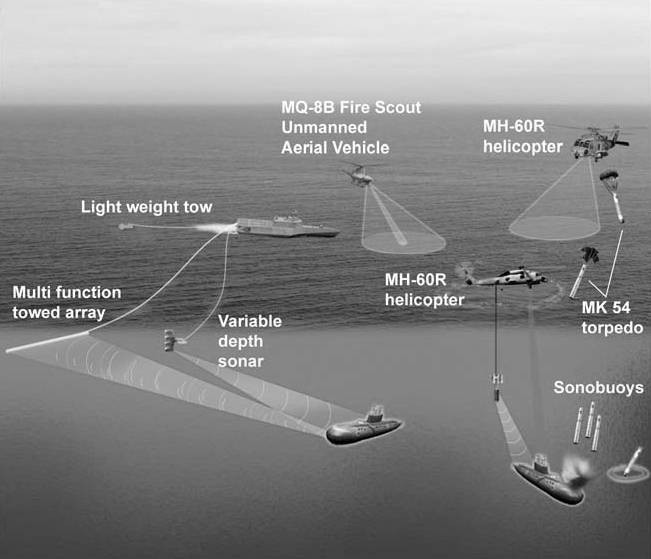 USNI News hase a great overview of the status of the mission modules.

The beating heart of both variants of the littoral combat ship (LCS) is the series of three mission packages the Navy is developing to handle some of the service’s most dire needs in the littorals.

The modular ship is a marked departure from the past in the way the Navy develops capability for its surface fleet. Sailors often liken the LCS to a video game system—with the mission packages being the actual games. But instead of “Halo” or “Call of Duty,” sailors will try their hands at mine countermeasures (MCM), surface warfare (SuW) and anti-submarine warfare (ASW).

On paper, the new capabilities and updates of existing functions will greatly increase the Navy’s ability to rapidly undertake some of its most dangerous jobs.

However, the mission packages have experienced delays of up to four years in fielding because of design problems, cost overruns, and manufacturing delays, according to the Government Accountability Office.

A July report from the GAO said, “a pause is needed” in the acquisition of the mission packages pending further review of the total LCS program.

“Navy has a great deal of learning to do about the ships, the integrated capability that they are intended to provide when equipped with the mission modules, and how the overall LCS concept will be implemented,” the report concluded.

Ailes acknowledged past failures in the program but painted an optimistic picture of the way forward for the mission packages.

“It’s a wondrous time to be the mission package guy today compared to three years ago because you can point to the successes,” he said.

Starting next year, the Navy will test the packages in a series of operational evaluations (OPEVAL) as a final examination before moving the new capabilities into the fleet.

Read the whole thing. There will be a quiz later. Oh, and take note of that last paragraph in the quote above.  The first two LCS ships have been in commission for years. And LCS-1 is currently on its first deployment. And yet, we’re still a year out from OPEVAL, let alone fleet introduction, of the modules.

This is the second story we’re lifting from USNI News today.

Since its introduction in 1970 aboard the EA-6B Prowler, the ALQ-99 jammer has been the premier airborne electronic warfare system for jamming air defense radar systems. Today, still aboard the EA-6B, it also forms the heart of the EF-18G Growler’s jamming capability.

Originally, the Q-99 had to counter technology such as the Fan Song and Fire Can radars. But over the years, the threat radar systems have become much more sophisticated, and far more resistant to jamming. Further, the sheer numbers of radars in contested airspace have grown. The Q-99 has evolved with those advances, keeping pace with the changing threat. But there is a limit to how far the basic architecture of any system can evolve. There comes a point where a fresh start is the better approach.

And so, about the time the US Navy decided the Prowler would be replaced with a variant of the two-seat SuperHornet, it also decided to begin work on a replacement for the venerable ALQ-99. The program became known as the Next Generation Jammer, or NGJ.

Now, sometimes, a program to replace a given piece of hardware just makes plain old sense. And NGJ is one of them. It became clear almost 20 years ago, a new jammer would be needed eventually to face sophisticated Russian air defense systems such as the S-300 and S-400 and their associated radars.

As it turns out, airborne jamming systems also can do some other pretty interesting stuff, such as jamming communications systems. But the primary mission is and will be jamming radars. So you’d think setting up a program to replace the ALQ-99 would be rather straighforward. You’d be wrong.

The procurement system today is set up so that the Office of the Secretary of Defense oversees virtually every major procurement program. And OSD and the acquisition system are set up so that traditional roles need not carry any real weight in the decision making process.  If a better, cheaper way to accomplish a traditional mission can be found via a non-traditional method, so be it.

The problem is, the only way to determine if that can be done is by in-depth analysis. And that analysis takes time. And it also operates on precepts given to the analysis team that may or may not be rooted in reality.

So here we are, a decade after the inception of the Next Generation Jammer program. And instead of designing, testing, and deploying the NGJ, what we’re dealing with today is a Government Accountability Office (GAO) report that tells us what any sailor in a Prowler or Growler squadron could have told you off the top of their head.

The Department of Defense (DOD) has assessed whether the planned Next Generation Jammer (NGJ) program is duplicative using a variety of means, but none of them address all of the system’s planned roles or take into account the military services’ evolving airborne electronic attack investment plans.

DOD analyses support its conclusion that the NGJ meets a valid need and is not duplicative of existing capabilities in its primary role—suppressing enemy air defenses from outside the range of known surface-to-air missiles.

However, these analyses do not address all planned NGJ roles, such as communications jamming in irregular warfare environments, or take into account the military services’ evolving airborne electronic attack investment plans.

According to GAO’s analysis, none of the systems that have emerged since DOD completed its NGJ analyses duplicate its planned capabilities; however there is some overlap in the roles they are intended to perform.

Redundancy in some of these areas may, in fact, be desirable. However, pursuing multiple acquisition efforts to develop similar capabilities can result in the same capability gap being filled twice or more, lead to inefficient use of resources, and contribute to other warfighting needs going unfilled. Therefore, continued examination of potential overlap and duplication among these investments may be warranted.

It’s frightful enough that time has been wasted studying the issue for years, and arguing over just what NGJ must be capable of doing, all while the legacy ALQ-99 system becomes less and less capable of defeating enemy systems.

The fact is, time is money. NGJ has had a program office, with staff (and salaries and all the other related expenses) for years. And the program office has spent years letting contracts to various defense industries to study and define what NGJ should be, and what it shouldn’t. And GAO has spent time and money studying the issue, only to tell us what we already know- that yes, a replacement for Q-99 is a good idea.

Almost a “dog bites man” <yawn> story at this point. From Business Week:

The Pentagon is absorbing $672 million and Lockheed Martin the remaining $328 million in added costs for the aircraft in the first four production contracts, the Government Accountability Office said in prepared testimony today for a House Armed Services Committee hearing on tactical aviation. The committee is conducting the first oversight hearing on the F-35 Joint Strike Fighter for the fiscal 2013 budget.

“The long-stated intent that the Joint Strike Fighter would deliver an affordable, highly common fifth-generation aircraft that could be acquired in large numbers could be in question,” Michael Sullivan, the GAO’s director of acquisition management, said in the statement.

The testimony previews the GAO’s annual report on the Defense Department’s most costly weapons program, which is to be published next month. The GAO’s findings and the Pentagon’s annual test report, issued in January, are the two primary sources that lawmakers and the public have for assessing the military’s and Lockheed Martin claims for the F-35.

The reports are also closely watched by the program’s eight international partners, including Canada, the United Kingdom, Italy, Australia and Norway.

The GAO’s quote there is spot on. If this fifth-generation fighter is too expensive, nobody will care if it meets mission. Partner nations will drop out by the end of the year at this rate.

What’s worse is we’ve seen this movie before. And we know all about the crying at the end.