While most correspondents covered the headquarters, the big picture, Ernie covered the dogfaces, the grunts, from North Africa to Italy, and from France to the far reaches of the Pacific.

He earned the Pulitzer Prize for his writing, his empathy for the hardships the average American soldier faced. He showed the humanity of the troops in that most inhumane arena, war.

Probably his best known column was The Death of Captain Waskow.

AT THE FRONT LINES IN ITALY, January 10, 1944 – In this war I have known a lot of officers who were loved and respected by the soldiers under them. But never have I crossed the trail of any man as beloved as Capt. Henry T. Waskow of Belton, Texas.

Capt. Waskow was a company commander in the 36th Division. He had led his company since long before it left the States. He was very young, only in his middle twenties, but he carried in him a sincerity and gentleness that made people want to be guided by him.

“After my own father, he came next,” a sergeant told me.

“He always looked after us,” a soldier said. “He’d go to bat for us every time.”

“I’ve never knowed him to do anything unfair,” another one said.

I was at the foot of the mule trail the night they brought Capt. Waskow’s body down. The moon was nearly full at the time, and you could see far up the trail, and even part way across the valley below. Soldiers made shadows in the moonlight as they walked.

On this day in 1945, Ernie Pyle was accompanying officers of the 77th Division during a “minor” operation to seize the island of Ie Shima, near Okinawa. A concealed Japanese machine gun nest fired upon the group.  The four men dove into a ditch. Pyle, raising his head to check on the others, was struck in the left temple by a second burst of fire, and killed instantly. 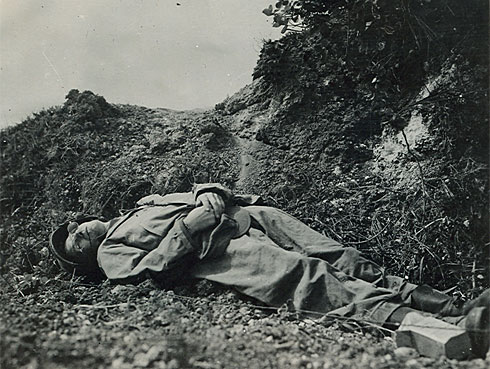