In Part I, we noted the challenge that an attacking escort would have to pass directly over a submerged submarine in order to attack. Early active sonars worked much like a searchlight, with the beam being narrow in both azimuth and depression. A deep diving submarine would pass under this beam at often fairly extended ranges. This meant that from the time when contact was lost until the depth charges detonated, as much as a minute could pass, and the target could maneuver to avoid damage or destruction.

The Royal Navy sought a way to deliver weapons to the target while it was still in sonar contact. Attempts at coordinated attacks with two or more escorts were tried, but the small number of escorts available, and the challenges of coordinating an attack made this approach less than successful. Ideally, a single escort would be able to gain contact, localize, track and attack a target without loss of contact.

As with so many innovations in modern warfare, it was the British who devised a solution.  An officer of the Royal Artillery had been experimenting with ways to overcome shortcomings in trench mortars, and had devised a spigot mortar. Rather than having the round slide down a tube, the round instead went over a short spigot. This meant the size of the round wasn’t set by the size of the tube. A variety of warhead sizes could be thrown from any given spigot launcher. 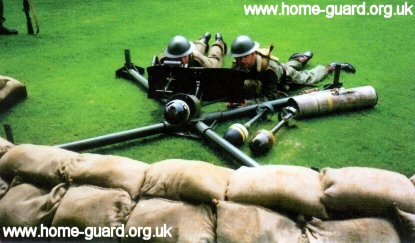 While spigot mortars weren’t a wild success for ground combat, it didn’t take long for the Royal Navy to see the potential as an ASW weapon. By mounting 24 spigots on the foredeck of an escort, a pattern of charges could be thrown ahead of the attacking escort. As a bonus, the individual spigots could be arranged so the charges would land in a predictable pattern, either circular or elliptical.  Carefully timing the firing of the charges would mean the recoil forces would be spaced over time (meaning the ship would need little reinforcement, simplifying installation and needing less weight) and would cause all the charges to hit the water simultaneously.

Dubbed “Hedgehog” because the empty spigots resembled the spines of the critter, the ASW spigot mortar entered service with the RN in 1942, and quickly proved its efficacy. It was also rushed into production for the US Navy.

Each individual charge was roughly 32 pounds. Rather than using a time or depth fuze, Hedgehogs were contact fuzed only. If there were no explosions, the attacking ship knew it had missed. A single charge was usually sufficient to kill a U-Boat. With a range of roughly 250 yards, the Hedgehog allowed the attacking ship to launch before contact with the target was lost. The pattern was aimed by steering the entire ship.

Hedgehog was small enough that smaller escorts such as Destroyer Escorts and Corvettes could mount it. For smaller craft, such as US built PCs and SCs, a rocket powered variant, known as Mousetrap, was developed.

One advantage of the contact fuze was if an attack missed, the attacking escort could more quickly reacquire the target submarine. Roiling waters from depth charges gave many a U-Boat the chance to slip away. Hedgehog gave the U-Boats no such cover.

Developed to combat the scourge of the U-Boat in the Battle of the Atlantic, ironically, the most successful use of Hedgehog was by the US Navy in the Pacific. Melding splendid shiphandling, tactics, and signals intelligence, the USS England (DE-635) sank no less than six Japanese fleet subs in a twelve day period.

Variants of Hedgehog would remain in US Navy service well into the 1960s.

The Soviets took the idea of an ahead thrown contact weapon, and developed a series of RBU weapons using rocket projectiles. To this day, virtually every Russian warship has one or more RBU launchers.

The Royal Navy had made significant improvements in sonar and underwater fire control. Automatic range and bearing recording were new capabilities. And the addition of the “Q” attachment to the standard Type 147 ASDIC (or sonar) gave accurate depth information of the target.  This allowed an escort to accurately track in three dimensions over time the position and course of a target. And that was more than just information, it was the first half of any fire control solution.

The answer was a weapon we’ve previously described as impractical, an ahead thrown depth charge. Named Squid, the depth charge mortar had three 12” tubes mounted inline, though with a slight variance, mounted on a rotating cradle. Each tube fired a 300 pound depth charge. Range of squid was roughly 275 yards. The slight variance in alignment of the tubes meant the charges impacted the water simultaneously in a triangular pattern. These charges were time fuzed by a clockwork mechanism to explode simultaneously. Most importantly, the timing was set automatically and continuously set by the fire control system until the moment of firing, giving far more accurate depth setting than any conventional depth charge system.

Squid was a very large, heavy system.  And the preferred installation was Double Squid, with two three-barreled mortars mounted. This meant a significant portion of an escort had to be devoted to the mountings, consuming valuable centerline space that would otherwise be devoted to gun mounts or torpedo tubes. For the RN, facing primarily a submarine threat in the Atlantic, this was an acceptable trade off. The US Navy, faced with air, surface and subsurface threats in the Pacific, found Hedgehog sufficient. Any redesign of escorts for Atlantic duty would have slowed production too much.

Double Squid fired two diametrically opposed triangular patterns superimposed. The first pattern was timed to explode 25 feet below the target depth, with the second triangle 25 feet above. The resulting “sandwich” shockwave was deadly to submarines. Of 50 Squid attacks in World War II, 17 destroyed the target submarine, a kill ratio of .34, far and away the most lethal system in use during the war. Squid remained in use in the Royal Navy until 1977.

Limbo (or ASW Mortar Mk 10) was a postwar development of Squid, with better range, heavier charges, stabilization for pitch and roll, and most importantly, automatic loading. Generally only a single Limbo was mounted, as the automatic reloading allowed rapid re-attacks. Limbo remained in use on British and Commonwealth ships until the 1990s.