`First, someone made a move in the right direction in the LCS program, about 32 hulls too late, but I’ll take it.

Secretary of Defense Ash Carter has ordered the Navy to trim its total buy of Littoral Combat Ships to 40 and down select to a single shipbuilder and design for the class as part of its fiscal year 2017 budget, according to a memo obtained by USNI News.

The directive to trim the service’s planned total of 52 planned LCS and Frigate hulls and direct the savings into other programs was contained in the Monday letter from Carter to Secretary of the Navy Ray Mabus.

The new plan would call for a building only six LCS between fiscal years 2017-2020 – eight less than the Navy’s submitted in its 2017 plan – and directs the Navy to down select to a single shipyard and a single hull type in 2019. 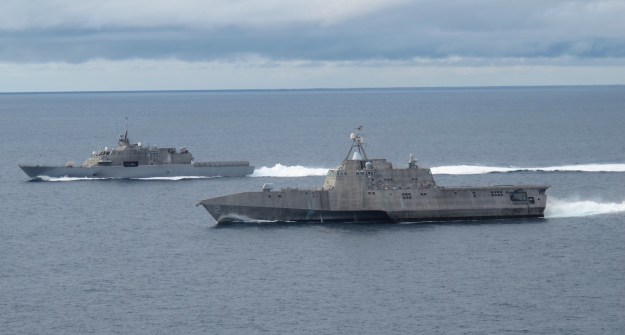 Why is two different hulls/combat systems bad? Well, it costs twice as much to develop, for one thing. But that’s already a sunk cost. From the beginning, LCS was supposed to have two designs. But it was also intended to downselect to one for mass production.  Two different hulls, and two different combat systems means the Navy now has to maintain two entirely separate maintenance pipelines, and two different school systems to train crews. Worse, even though the Navy is finally going to one design, it will still have several of the losing design in the fleet, and be required to support them for their entire service lives.

The announcement is one thing. But as they sometimes say, the medium is the message- as Bryan McGrath notes in a post at Information Dissemination,

What struck me most about this memo was its almost parental tone of disappointment. I told a friend yesterday that it sounded like a letter a young man would get in college from his father when he had serially overspent his allowance. One rarely sees THIS level of bluntness in correspondence between the policy elephants. Which brings me to the most shocking part of this memo—that it wasn’t classified or limited in its distribution in ANY way. Either OSD utterly failed to appreciate the gravity of the memo and simply overlooked its control, or there was a desire for it to be leaked to the media. And while I generally tend to follow the rule of “when faced with a choice between villainy and incompetence in a bureaucracy, choose incompetence”, in this case it appears that the darker view applies.