The same techniques guided ancient Polynesians in the open Pacific and led Sir Ernest Shackleton to remote Antarctica, then oriented astronauts when the Apollo 12 was disabled by lightning, the techniques of celestial navigation.

A glimmer of the old lore has returned to the Naval Academy.

Officials reinstated brief lessons in celestial navigation this year, nearly two decades after the full class was determined outdated and cut from the curriculum.

That decision, in the late 1990s, made national news and caused a stir among the old guard of navigators.

Maritime nostalgia, however, isn’t behind the return.

Rather, it’s the escalating threat of cyber attacks that has led the Navy to dust off its tools to measure the angles of stars.

After all, you can’t hack a sextant.

I was in the “never should have quit” camp, btw. That’s the same position I take on paper maps and protractors for land navigation. 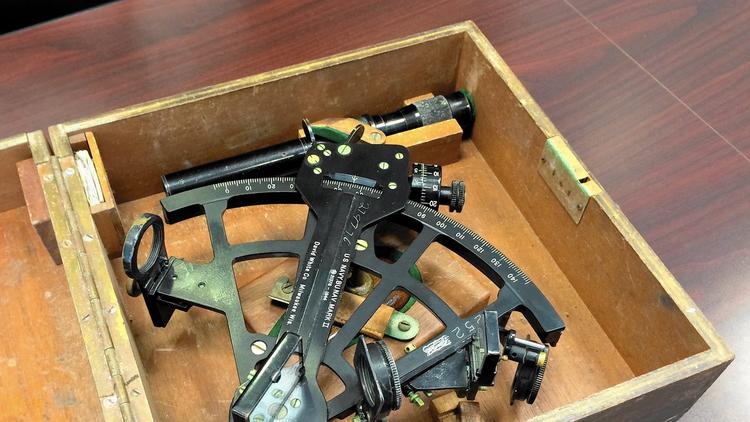 This 1940s sextant is among the supply stored at the Naval Academy. Midshipmen were tested on celestial navigation for more than a century before the required class was cut in the late 1990s. (By Tim Prudente / Capital Gazette)

GPS does offer several advantages over celestial navigation. For one thing, much greater accuracy, measured literally in single digits of feet. For another, it is continuously updating. Other navigational systems, such as inertial, start with a known fix, and then “drift” after that, with the error in position accumulating over time until the next opportunity to update from a known position.

But as the cited article notes, you can’t jam a sextant. Sorta. Cloud cover actually does a pretty good job of jamming a sextant.

Ordinarily, I’m not at all in favor of gold-plating a system. Here, I’ll make a bit of an exception.  While having midshipmen pick up a sextant and the sight reduction tables is the best way to learn, I think it would  be pretty silly for the XO or Navigator to stand on the bridge wing shooting Local Apparent Noon with a 100 year old design.

Why not field a modern gyro stabilized star/sun tracker? And of course,  an iPad app that you simply input the sightings into. Heck, you could have that capability built into the star tracker.

This is not some fantastic idea I just came up with. Did you know some early  ballistic missiles used celestial navigation, with automatic trackers? Day or night, once the missile got up high enough above any clouds and most of the atmosphere, the needed stars were always visible.

The Navy (and the Army to a certain extent) desperately needs to relearn how to operate in an Emission Controlled (EMCON) environment. That means not only using EMCON to deny the enemy information, but also retaining the ability to work when networked sensors are denied or degraded. As fast as we are increasing our capability to field better capabilities through networks, you can bet China and others are working to disrupt or exploit those networks.

9 thoughts on “The Stars are in our Future”