First up, earlier in the week, during an exericise, the USS Sullivans launched an SM-2 missile from her Mk41 Vertical Launch system. Almost immediately after clearing the launcher, the missile exploded. 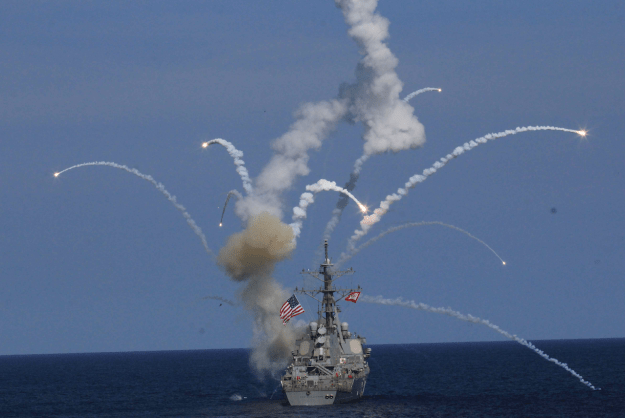 Given that the missile had no warhead, it’s virtually a certainty that the solid rocket motor failed, and rather spectacularly at that! I’ve never heard of a similar failure of an SM-2. It could be simply due to aging, or a manufacturing defect. One suspects the Navy is going to take a close look at  a lot of other SM-2 Block III missiles.

I have, on the other hand, seen a Royal Navy Sea Dart fail rather spectacularly on launch.

The US Navy is constructing a massive simulation capability at NAS Fallon, home of Naval Strike & Air Warfare Center. But more than being a collection of 80 simulators, it will also be integrating cruiser Combat Information Center sims, and integrating with genuine aircraft conducting real flights.

The Navy has begun to build a next generation training center that will pair up to 80 fighter, reconnaissance aircraft and ship simulators with live fliers in a massive environment that blends the real world with the virtual.

Navy director of air warfare Rear Adm. Mike Manazir told USNI News on July 16 that the Navy is working towards opening an Air Defense Strike Group Facility at Naval Air Station Fallon in Nevada in January 2016 and upgrading it to an Integrated Training Facility by 2020, which would represent a fundamental leap forward in live, virtual and constructive (LVC) training.

Today, the Navy can conduct live-constructive training, in which a live pilot up in the air reacts to computer-generated scenarios, and virtual-constructive training, in which a person in a simulator reacts to computer-generated scenarios. But connecting a pilot in the air with a pilot in a simulator to operate in the same constructive environment – a full LVC event – is a real technical challenge.

The big benefit is that you can construct very large scale scenarios, and tailor them to any location in the world. That is, it will give a more genuine representation of actual operations that current scenarios.

Not exactly a Navy only story, but Lockheed is looking at ways to use sensors and datalinks to increase real time targeting capability.

A high-flying Lockheed Martin U-2 spy plane has enabled a mission control station to dynamically re-target a simulated Long-Range Anti-Ship Missile (LRASM), using data passed from an F-22 Raptor over the deserts of Southern California in a recent flight trial.

During the tests, targeting data was passed from the F-22 to a ground station via an L-3 Communications modem on the U-2, says Scott Winstead, Lockheed Martin’s head of strategic development for the U-2 programme. This allowed the ground station to re-target the LRASM surrogate, essentially a cruise missile mission systems flown on a business jet.

In addition, the U-2 was able to translate and pass data between the F-22 and a Boeing F-18 Hornet during the series of flights, which took place in June. The tests were designed to evaluate new US Air Force open mission system (OMS) standards using a Skunk Works product called Enterprise OMS.