Pentagon leaders often speak of the need for disruptive technologies in the Fleet to mitigate the risks of shrinking defense budgets, declining U.S. military technological superiority and improving adversary capabilities. Last week, a remarkable example of disruptive innovation occurred. How did the Navy react? It simply reaffirmed its unimaginative plan to send its carrier-launched drone to the boneyard—and potentially sentence the aircraft carrier to a similar fate.

The Navy’s test carrier drone, the X-47B UCAS-D (Unmanned Combat Air System Demonstrator), recently participated in the first-ever fully autonomous aerial refueling at Naval Air Station Patuxent River. Though the implications of this engineering feat are wide-ranging and not wholly known at this point, successful demonstration of unmanned aerial refueling does shed light on several ongoing arguments about the future of U.S. military aviation.

via Future Warfare: The X-47B | RealClearDefense.

We’re always hesitant to match wits with Mackenzie and Bryan, two very smart people, who make a living at this sort of thing.

It has done all five tasks, though let us note that each was done in near perfect conditions, and not the worst case scenarios of weather or other operational environments that any fleet platform would face.

But that is all the X-47B was designed to do. The leap from a technology demonstrator to a deployable combat assets is vast. 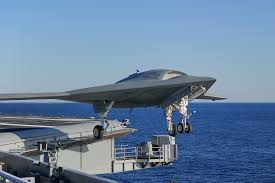 We would remind Mackenzie and Bryan of the X-35 JSF demonstrator, a platform visually almost indistinguishable from the F-35 fighter. The X-35 was a technology demonstrator as well. It first flew in 2000. Here we are a decade and a half later, and its progeny, the F-35, is still not quite to its Initial Operational Capability.

There is a growing fight within the Naval Air community over what the operational UCLASS (Unmanned Carrier-Launched Airborne Surveillance and Strike) platform should focus on. There is a strong school of thought in NavAir that the emphasis should be on the surveillance part, not the strike part. That puts them at odds with people like John McCain, who’s powerful position on the Senate Armed Services Committee gives him an outsized voice on what is to come. McCain and others see little point to a platform that isn’t designed to address anti-access/area denial threats from China and other potential adversaries.

Those threats are very much in the mind of the folks at NavAir. Their argument is that a surveillance focus is technologically feasible now, and the design and operational deployment of such a platform would be relatively quick and painless. And that operational deployment would provide the real world experience and lessons learned that would made future evolutionary strike variants much more likely to be successful, all while addressing one of the critical shortcomings of today’s Hornet centric airwing.

We tend to side with the less ambitious crowd arguing for a surveillance emphasis.