The largest Japanese naval vessel since World War II, the JS Izumo, has joined the Japanese Maritime Self Defense Force. 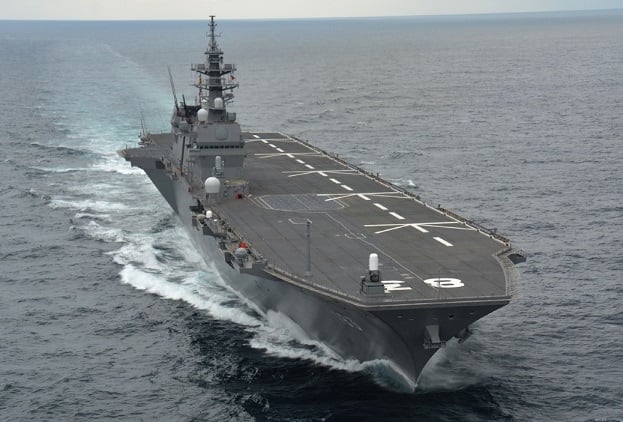 Sam LaGrone, as always, brings us the news.

A 24,000-ton helicopter carrier has formally entered the fleet of Japan’s Maritime Self Defense Force (JMSDF) on Wednesday making the ship the largest warship Japan has fielded since the close of World War II.

The commissioning ceremony JS Izumo (DDH-183) — the first of two for the JMSDF — was held in Yokohama and attended by Defense Minister Gen Nakatani.

Billed by the Japanese as a platform to assist in anti-submarine warfare (ASW) and humanitarian aid and disaster relief (HADR) operations, the ship has flared regional tensions in neighbors— China especially — who view the ship as a power projection platform with a historically aggressive name.

I suppose it is theoretically possible for Izumo and her sister ship to serve as power projection platforms, but they’re certainly not optimized for it.

This is the second class of helicopter carriers the Japanese have built in recent years. The earlier, slightly smaller class of two Hyugas weighed in at around 19,000 tons full load. Interestingly, the Hyugas carry a more robust self defense fire control system and weapon suite. The Izumo appears to carry only the most basic self defense systems. Both classes carry impressive sonar systems.

Of course, large ships like this aren’t intended to operate independently. Instead, they form the centerpiece of an escort group with other surface ships, destroyers and frigates, to provide a “bubble” of ocean that is denied to enemy submarines, surface ships, and air assets. The Japanese actually built a class of destroyers specifically to provide escort to these larger helicopter destroyers.  Add in one of their formidable Kongo or Atago class Aegis destroyers, and a couple of conventional destroyers or frigates, and you have a very potent surface force.  But it is a sea control force, one that can deny an enemy use of a particular portion of the sea. The JMSDF lacks the ability to project power ashore and influence the enemy there. And that is, of course, by design, and in accordance with the Japanese constitution drawn up by MacArthur after World War II.