A couple years ago, we discussed the difference between troopships and Attack Transports. Briefly, Attack Transports were designed to move a unit, typically a battalion, its vehicles and equipment, and an initial issue of supplies of ammunition, fuel, rations and such, directly to the site of an amphibious assault, and land them with the Attack Transport’s own embarked landing craft.

Designated APA, there were a couple hundred Attack Transports commissioned during World War II, of various classes. Many were civilian cargo vessels bought into the service and converted to the purpose. Indeed, when they were built, they were partially subsidized by the government with just that possibility in mind. Many others were purpose built from the keel up (though still based on standard commercial designs) to serve as APAs.

While the APAs were invaluable for the hundreds of amphibious assaults during World War II, they were a relatively inefficient means of moving people from the US to the overseas theaters of war. For their size, they carried a small number of troops (typically around 850 to 1100) and were generally fairly slow ships at around 15-18 knots.

Of about 16 million service members in World War II, about half served overseas during the war. And for the most part, they didn’t arrive via amphibious assault. The build up of Army Air Force ground support units in England, the staging of over a million troops in England prior to D-Day, and the huge numbers of logistic troops in England, and later France all called for moving the largest practical number of troops in the least amount of time. And to do that, troopships were used.

Unlike APAs, troopships were almost universally simply the high speed pre-war passenger liners, taken into service and outfitted to carry as many troops as possible. No provision was made for supporting amphibious landings, as they were intended to operate from port to port, embarking and debarking in friendly territory.

One such liner pressed into service as a troopship (designated AP) was the USS Wakefield. Launched as the SS Manhattan in 1931, she was among the first US built fast, large ocean liners. Just before the war, she was taken in hand by the Navy and with a minimal conversion, served as a troop transport. Her first real mission was actually to transport British troops. A mission to move British troops to Capetown, South Africa was diverted to Singapore to reinforce the British garrison there. War in the Pacific broke out before she arrived. While fueling for the return voyage, a Japanese raid on the harbor resulted in a bomb gutting her sickbay, but not otherwise compromising her ability to sail. She quickly fled to make repairs elsewhere, and begin the job of moving US troops.

Later in 1942, returning to New York after a voyage to England, she suffered an on board fire the gutted virtually the entire ship. It took 18 months to repair her and return her to service. In the process, she was almost completely rebuilt, with the entire ship above the main deck being newly built. 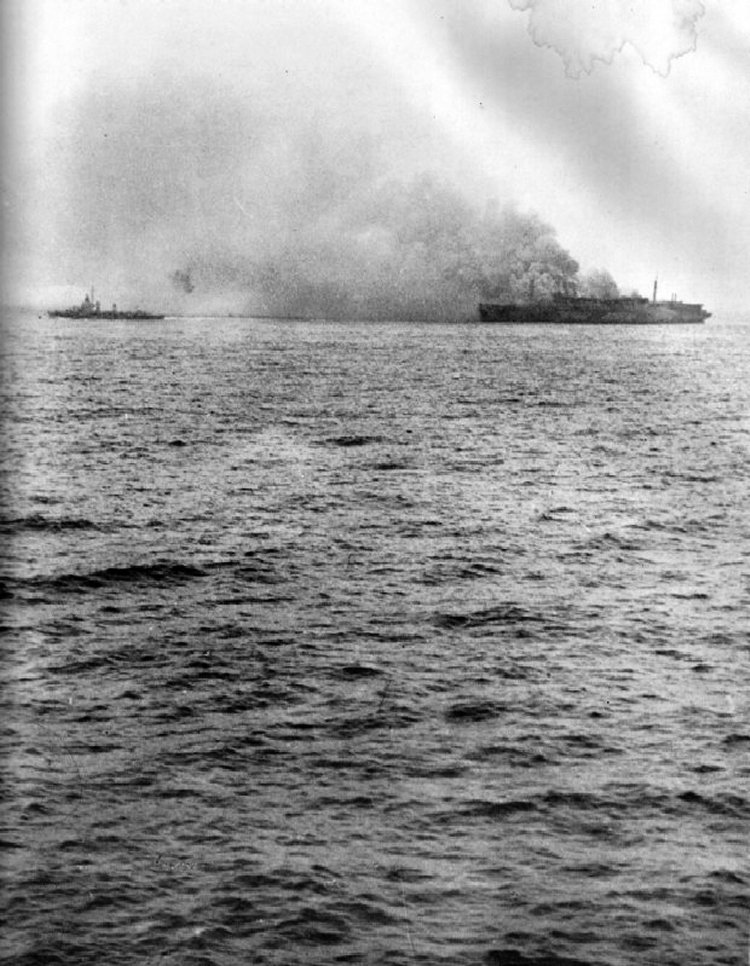 On fire, and as a gutted hulk grounded off Halifax.

Placed back into service in 1944, she would serve two more years, moving about 110,000 troops overseas, and eventually helping to return many of them as well before being decommissioned in 1946.

For many soldiers, the troopship experience was a rather miserable one. They were extremely crowded. As a liner, the SS Manhattan typically carried about 1200 passengers. As a troopship, USS Wakefield carried 6000-8000 troops. Galley services were limited, so troops were only fed twice a day (the crew, however, were still fed the normal three times a day). Water and space for washing was limited, though the Wakefield was far better than most. She had a supply of fresh water for troops. Most troopships only had saltwater for washing and laundry. Freshwater on those ships was strictly for drinking and cooking.

Fast ships such as the USS Wakefield often sailed without escort. With a sustained speed of over 20 knots, it was virtually impossible for any U-boat to intercept her. Submerged U-boats would be left far behind. Any surfaced U-boat would find itself outgunned by the Wakefield’s respectable armament of four 5”/38 guns and four 3”/50 guns.

The USS Wakefield and a great number of other transports, as well as amphibious shipping and innumerable landing craft, while US Navy ships and craft, were manned by the US Coast Guard. With the Coast Guard placed under the Department of the Navy during World War II, the Coasties, in addition to fulfilling their peacetime missions, provided tens of thousands of personnel to crew a huge number of ships, freeing US Navy sailors for other missions.

Grab a cup of coffee, and spend about 20 minutes aboard the Wakefield.