We’re generally admirers of retired US Army Major General Robert Scales. He was a fine combat officer, by most accounts, and a talented historian. What he isn’t is an expert on small arms.

Back on December 28th, Scales published a piece in the Atlantic titled “Gun Trouble” bemoaning the continued deployment of the M16/M4 series of rifles by the US military.

Any lost edge, however small, means death. A jammed weapon, an enemy too swift and elusive to be engaged with aimed fire, an enemy out of range yet capable of delivering a larger volume of return fire—any of these cancel out all the wonderfully superior and expensive American air- and sea-based weapons that may be fired in support of ground troops. A soldier in basic training is told that his rifle is his best friend and his ticket home. If the lives of so many depend on just the development of a $1,000, six-pound composite of steel and plastic, why can’t the richest country in the world give it to them?

The answer is both complex and simple. The M4, the standard carbine in use by the infantry today, is a lighter version of the M16 rifle that killed so many of the soldiers who carried it in Vietnam. (The M16 is still also in wide use today.) In the early morning of July 13, 2008, nine infantrymen died fighting off a Taliban attack at a combat outpost near the village of Wanat in Afghanistan’s Nuristan province. Some of the soldiers present later reported that in the midst of battle their rifles overheated and jammed. The Wanat story is reminiscent of experiences in Vietnam: in fact, other than a few cosmetic changes, the rifles from both wars are virtually the same. And the M4’s shorter barrel makes it less effective at long ranges than the older M16—an especially serious disadvantage in modern combat, which is increasingly taking place over long ranges.

Emphasis mine. Hold that thought, we’ll come back to it. To be sure, the M16/M4 is not without its faults. But then, every small arms design is a compromise between several competing factors. It should be reasonably light, lethal (in terms of terminal ballistics), accurate both as a matter of internal ballistics and ergonomics, durable, easy to maintain, and easy to train with. Generally, improvements in one area tend to adversely effect another. Most obviously, light weight tends to reduce durability.

What makes the evolved M16/AR15 series so effective that the Army’s Individual Carbine competition conducted in 2013 – evaluating 8 other competing designs under demanding conditions – concluded there was nothing to gain by replacing it? In addition to the 2013 evaluation, the M16 series has outlasted a nearly non-stop campaign to replace it with “leap ahead” rifle technology, from the flechette based Special Purpose Individual Weapon (SPIW) program in the 1960’s, to the Objective Individual Combat Weapon (OICW/XM8) program, effectively terminated in 2005, and has even survived the 2009 limited adoption of the Mk16/Mk17 Selective Combat Assault Rifle (SCAR), a purpose built modular weapons system painstakingly designed in full cooperation with downrange “operators” to specifically address requirements of USSOCOM. SOCOM fielded the 7.62mm SCAR-H / Mk17, but declined to adopt the 5.56mm variant because in their opinion it did not represent a significant improvement over the current M4A1 Carbine. Despite the option to use nearly any weapon they choose, when a SOCOM operator arrives on the objective today he’s more than likely carrying a 5.56mm M4 variant.

As noted by Grosenheider, the Army has repeatedly attempted (and failed) to make a leap forward in small arms technology. That leaves marginal improvements on the table. Which, as Grosenheider shows, is just what the Army has been doing with the M16/M4 family since its introduction particularly in the past decade.

Let’s go back to MG Scales on the Battle of Wanat.

Some of the soldiers present later reported that in the midst of battle their rifles overheated and jammed.

Yes, that’s true. The fact is, no rifle lightweight enough for general issue can handle more than a certain sustained rate of fire. There’s a reason machine guns weigh more than rifles, after all.  And even the soldiers that fought there understand this. Via @WesleyMorgan on Twitter: 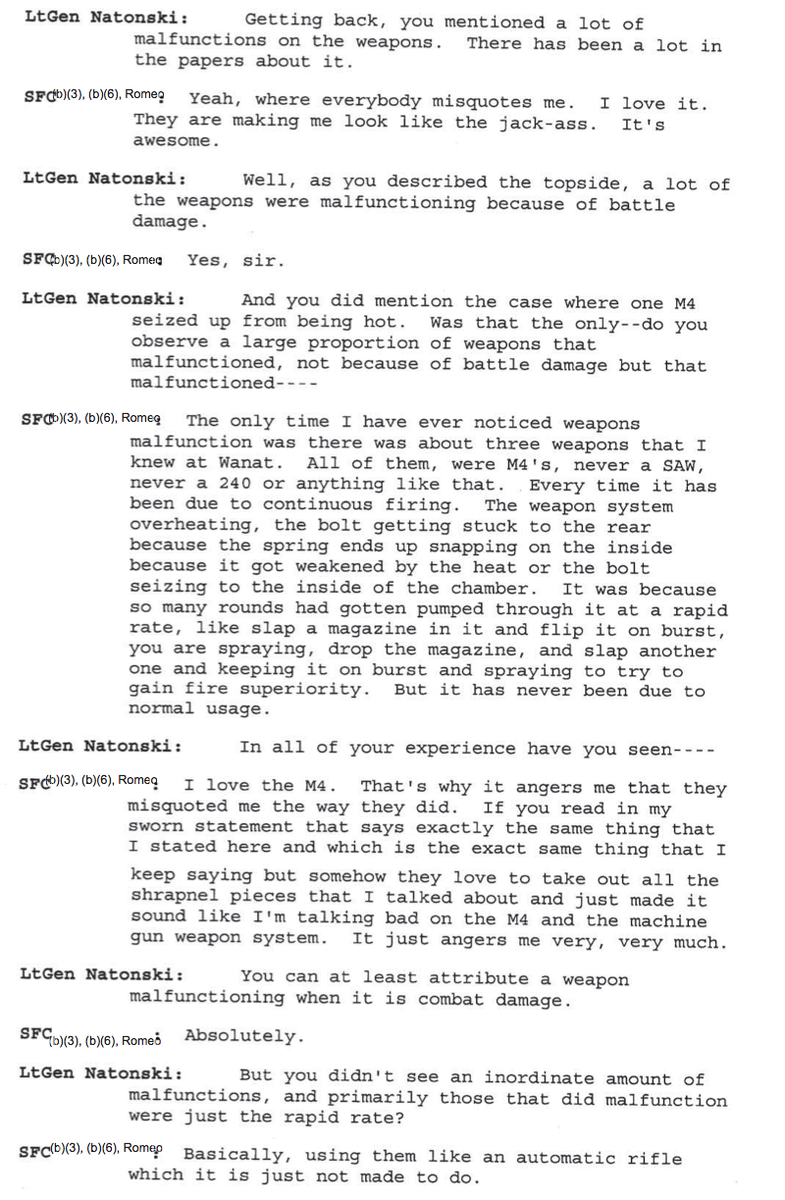 “I love the M4. That’s why it angers me that they misquoted me they way they did. If you read in my sworn statement that says exactly the same thing that I stated here and which is the same thing that I keep saying but somehow they love to take out all the shrapnel pieces that I talked about and just made it sound like I’m talking bad on the M4 and the machine gun weapon system. It just angers me very, very much.”

Surveys of soldiers have consistently found them to be highly satisfied with the M4 carbine, indeed, moreso than any other small arm in the inventory.

The bottom line is that the M16/M4 is a satisfactory family of weapons, and the ultimate arbiter of whether soldiers will be successful with it is in training them to maintain and fire them properly.