So, back on December 10, the Coast Guard commissioned the fourth of a planned eight of the “Legends” class National Security Cutters. The NSCs are the replacement for the long serving Hamilton class high endurance cutters. 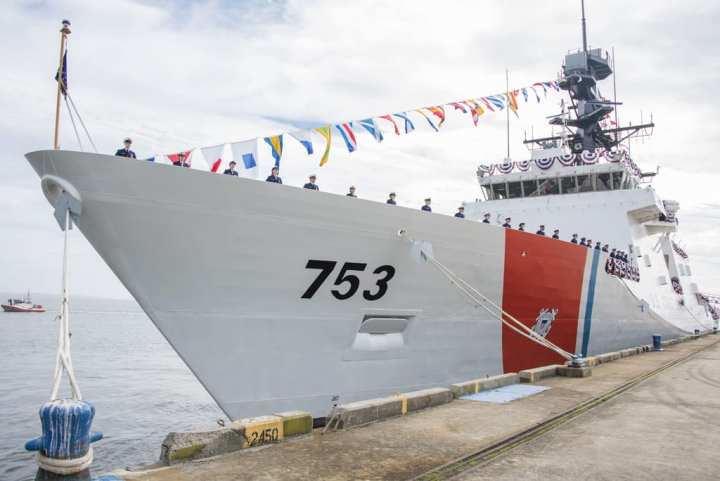 The development of the NSC was part of the troubled “Deepwater” Coast Guard/industry partnership to recapitalize the Coast Guard’s inventory of ships and aircraft with modern, integrated systems. If the development was sometimes troubled, it was in the end successful in fielding the NSC, the Fast Response Cutter (as a replacement for the 110’ cutters) and the HC-144A patrol plane, as well as new classes of small craft.

At 418’ long, and displacing about 4500 tons, the NSCs have enough endurance to patrol for 60 to 90 days at a time. They have a combined diesel and gas turbine propulsion system, with a pair of diesel engines providing economical cruise power, and a dash capability from the LM2500 turbine for a top speed of about 28 knots. They’re large enough to carry and support an aviation detachment with up to two helicopters. They have a very respectable sensor suite, and are able to datalink with other Coast Guard assets, Navy networks, and allied forces.

The NSCs were built with a great deal of attention paid to crew comfort. The largest berthing compartments have only six racks. Furthermore, they were designed with excess capacity. The crew consists of 113 officers and men, but the ship has accommodations for up to 148.

The Coast Guard’s virtual tour gives an excellent look inside, and I highly recommend it.