Faced with the challenge of mounting a cross channel invasion from England to France, the US and Britain realized that small landing craft like the famed Higgins boat would be enough to land the very first assault echelons, but the need to very rapidly build up forces on the far shore would require something more substantial. The ideal craft would lift a reinforced rifle company, be capable of berthing and feeding them for about 48 hours, and be able to land them directly upon the far shore.  The result was the Landing Craft Infantry (Large).

The basic hull was 158 feet long, with a beam of 23 feet. Power was provided by two “Quad Pack” Detroit Diesel engines driving two shafts with reversible pitch propellers.  The Quad Pack was an interesting engine design. No diesel engine of suitable size and power was in production, so Detroit Diesel took four of their existing 6-71 engines, and coupled them to a shared driveshaft. The resulting 1704 cubic inch displacement engine would be used in multiple ships. The LCI(L) had a top speed of about 16 knots, and could maintain 15 knots. At a cruising speed of 8-10 knots, the ship had a range of about 4000 nautical miles, allowing it to self deploy from the US to Britain or to the distance Pacific. While it could self deploy, it could not embark troops for such a voyage.

Nine hundred twenty three LCI(L)s would be built in ten US yards. Two hundred eleven were transferred to the Royal Navy.  Over the course of the program, the design of the deckhouse and the internal arrangements were changed as a result of feedback from the fleet. Originally, two ramps one either side of the bow were used to disembark troops on the beach. First flight ships also had a low, square conning tower. Later ships had a higher, rounded “castle” conning tower with better visibility, and the final batches of ships replaced the ramps with a single ramp through double doors on the bow. These ships also had a larger deckhouse, allowing an increase in troop berthing from 180 to 210. 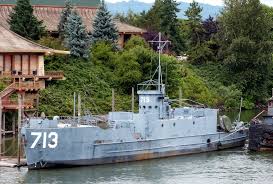 The basic ship was also modified for a variety of roles, such as Flotilla leader, and most famously, gunboats.  The gunboat conversions were so successful that a further 130 ships were built specifically as gunboats, and known as the Landing Craft Support (Large).

Almost immediatley after the war, virtually the entire fleet of LCIs was decommissioned and disposed of. Most were scrapped, though a few were sent to foreign navies or bought by private parties. Today, there are a handful still around, including one in California, and one in Portland, Oregon, undergoing restoration to serve as a museum ship. And one of the volunteers at that example has produced a 42 minute guided tour of LCI-713.

The ship belongs to the non-profit Amphibious Forces Memorial Museum. The next time I head up there, I’m definitely going to have to visit.

Oh, and as an added bonus, there’s an operational 78’ PT boat in Portland as well. But we’ll save that for another post.

4 thoughts on “The Landing Craft Infantry”