Unlike the eastern seaboard, the western coast of the continental United States has relatively few major ports. From south to north, the main seaports include San Diego, Los Angeles, San Francisco, the Columbia River, and Puget Sound. There are others, but those are the “Big Five” handling the majority of seagoing vessels.

Interestingly, all five are quite suited to seacoast defense. Depending on the time in question, Los Angeles and Puget Sound might have posed a challenge for the defender, but by the Endicott period, the guns and mines available were quite suitable to close off each port.

Craig has an interesting post on the concerns the Union had for the security of San Francisco during the Civil War. At that time, San Francisco was by far the most significant western port, and as the shipping point for the vast majority of California gold rush gold that was financing the Union, could have made a very attractive target for a Confederate raider, or an adventurous foreign power, say England.

All of this was known by authorities in Washington.  In 1856 a survey of the terrain brought back numerous recommendations to fortify the bay. Those included additional batteries to supplement Fort Point and located on Alcatraz, Yerba Beuna, and Angel Islands, Point San Jose, and, most important to the Golden Gate, Lime Point opposite Fort Point.  I’ve highlighted some of those on a snip from the 1859 coastal survey map (which, by the way, indicates that someone had “cast a lead” into those waters to figure out the depth):

Similarly, last weekend I enjoyed the view from Cabrillo National Monument.  CNM and Fort Rosecrans National Cemetery are today on the grounds of Naval Base Point Loma, but used to be within the confines of Fort Rosecrans, a Coastal Artillery post with several batteries guarding the entrance to San Diego harbor.

One of the interesting things about San Diego is that it has only one channel in or out. To say that Fort Rosecrans dominates that channel is something of an understatement. The seaward facing batteries control the approaches, and the channel itself was narrow enough that even a very modest minefield could completely seal the channel. 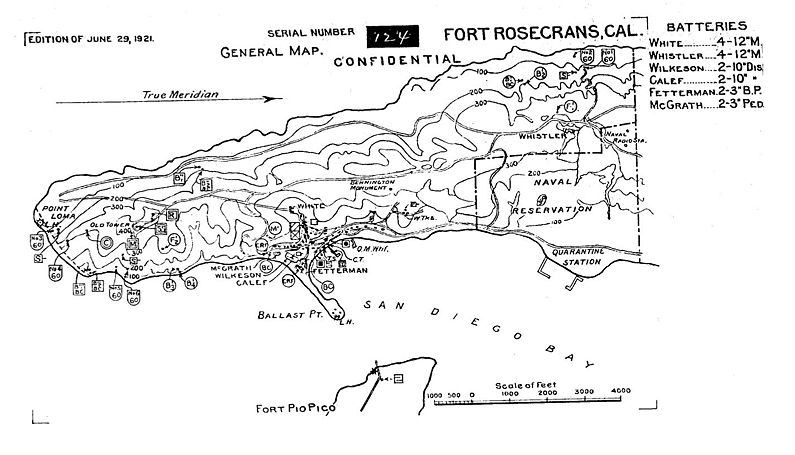 A mine casemate for a controlled minefield was also included.

To give you an idea how restricted the channel is, here’s the USS Chancellorsville, CG-62, passing through the channel.

During World War II, several additional batteries were added.  The big punch added was a pair of casemated 16” guns at Battery Ashburn (aka Battery 126).

Both batteries were originally training batteries for the US Marine Corps. And therein lies an interesting side story.

The US Army’s Coast Artillery Corps was responsible for the defense of the US ports and harbors and those of its overseas possessions. But what of advanced bases?

During the interwar years, having tasted the success of large scale operations in World War I, the Marines were soon relegated back to fighting in banana wars in South America, and providing detachments aboard US capital ships. In search of a raison d’etre, the Marines looked to the Pacific, and like others, saw a likely war with Japan.

They saw that any US fleet movement across the Pacific would entail seizing and defending forward operating bases. And contra our vision today of the Marines storming the beaches, the hope was they would be able to occupy undefended, or lightly defended island outposts, and then defend them against Japanese counterattack. Accordingly, there was a significant slice of Marine Corps doctrine that focused on seacoast defense of forward bases. And Batteries Zeilin and Gillespie were training batteries allocated for Marine Defense Battalions to practice their trades.

And apparently, the instructors at Battery Gillespie did right by their students, as Marines manning 5” guns at Wake Island suceeded in sinking the IJN destroyer Hayatuke during the initial Japanese landing attempt, the first of many Japanese surface ships sunk during World War II.

Batteries Zeilin and Gillespie were turned over to the Army early in the war. And while Fort Rosecrans was never called on to actively defend San Diego, it stood guard throughout the war. Further it was a major training center for the Coast Artillery, providing training in both seacoast defense and anti-aircraft artillery defense.

The age of aviation rendered the seacoast gun obselete by the end of World War II, and Fort Rosecrans was soon surplus to the Army’s needs. Closed in 1948, it was turned over to the Navy in 1959, and continues to this day to be home to significant naval activities, as well as the lovely Fort Rosecrans National Cemetery, and the beautiful and popular Cabrillo National Monument.

9 thoughts on “The Defense of the West-SeaCoast Fortifications”