Among the many little things the Army taught me, one of my favorite is the art of rappelling, descending from a height via rope, using a friction device to control the rate of descent.

Most people going through Basic Combat Training these days get tossed off a 40’ tower a time or two, and that’s about it. Attendees of one of the Army’s Air Assault Schools learn to rappel from helicopters in flight.

But here’s the thing. It’s a fairly “low density” military skill. That is, I’ve never met anyone who had to rappel to accomplish their mission. Rappelling has been used, tactically, but only in very limited uses. Regular line grunts like myself really had no need to either rappel from either  helicopter or in a mountaineering sense.

The rappeller is attached to the rope via two items. First, he or she ties a harness known as a Swiss seat from a twelve foot section of rope (generally made from Army gold line). Next, he attaches a spring loaded carabiner to the front of the Swiss seat. By passing the rappelling rope through the carabiner, with a full turn, the rappeller can control the friction and thus the rate of descent. Standard loads in my unit at that time had every soldier carrying two D-rings, and a 12-foot length of rope. Each squad would carry a 120’ green line. Not that we ever needed it, but we had it. The same equipment was also useful for river crossings. We never did those either, but we practiced quite often in the event we deployed somewhere it was needed.

Now, while rappelling may only have a limited tactical utility, it does have one thing going for it.

So, shortly after learning the fundamentals of rappelling, I and some coworkers took that newfound knowledge out to Wheeler Air Force Base on a Saturday to one of the training areas we Army guys routinely used, and, using Army equipment, went rappelling. Great fun. Eventually, the Air Police came by, and told us that Range Control didn’t permit us to use that area. Finding another easy to access spot in Hawaii was surprisingly difficult.

While I was home in Washington, I found a terrific spot to go rappelling on Mt. Erie. But I also quickly realized that while one could safely rappel using only Army equipment, there were far better alternatives available on the commercial market.

First, Army Green Line isn’t actually a rappelling rope, it’s a climbing rope. You want a climbing rope to be quite elastic, as that stretchiness absorbs the energy of a falling climber. But in rappelling, you want a “static” rope with minimal stretch.  About $100 later, I was the proud owner of 50 meters of Blue Water II 7/16” line, probably the most popular rappelling line of the time.  And while a rope Swiss seat was functional, buying 1” nylon tubular webbing made a significantly more comfortable seat.

Most importantly, from a safety standpoint, was adding a “figure 8” descender. 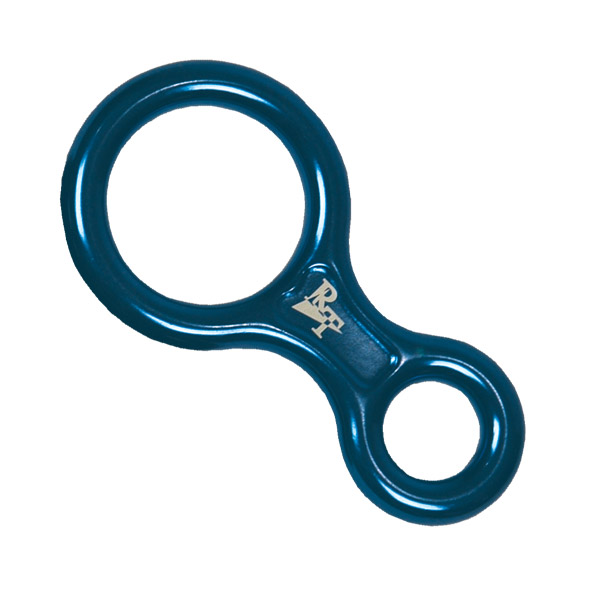 See, when using a spring-loaded snaplink as the deceleration device, it’s critical that when you loop the line through it, that you take the slack from the anchor side of the line. If you take the slack from the downhill side, it will look just fine until you place your body weight on the line. The line will then actually ride over the gate, and unsnap, leaving you with no control over your speed, and you plummeting to death or injury at a high rate of speed. I like to think I’m not dumb enough to do this, but I also like to mitigate risk whenever reasonably possible.

When using a Figure 8, that risk is eliminated.  The rope can really only be mounted one way.

My memory is a little fuzzy on the timeline, but I know Esli and I went rappelling at Mt. Erie a few times. Once I even took my neice, at the tender age of 11 or 12, and threw her over the edge. She still reminds me how much fun that was.

Over the years, I added more and more rope, Figure 8’s, snaplinks (usually the locking kind shown in the pic just above) and eventually, commercially made climbing harnesses, as they’re much, much more comfortable.

In Colorado Springs, one of the local national forests had just about the best ever spot to go rappelling I’ve ever found. At the base of a cliff, there was a nice spot for parking, next to a lovely babbling brook, an easy route to hike to the top, good anchor points for the rappelling ropes (you really don’t want them to come loose), and the cliff was just the perfect height, leaving just a couple feet of rope at the bottom.

One of the more fun methods of rappelling is the so called Aussie rappel, in which the descender is hooked in the small of the back, and the rappeller faces forward as he descends.

In many units, there’s something called Sergeant’s time.  Basically, for about four or five hours a week, the lowest level NCOs have time set aside exclusively to train their teams, either in individual or team tasks. This makes sure training for these tasks isn’t overwhelmed by higher echelon training, and also gives junior NCOs excellent experience in planning for training, and training their troops. And learning to train troops is Leadership 101. If you can’t train ‘em, you can’t lead ‘em.

Things kind of mushroomed from there a bit, and in the event, I ended up taking my entire platoon out. While great attention was paid to safety, great fun was also had. The company commander and 1SG were there the whole time, and even the battalion commander (who frankly, astonished me by allowing that level of risk be taken- one injury and his career would be over) showed up as well.

If rappelling class didn’t have any directly applicable use to mechanized infantry, we did remind our troops that the Army can be fun, great classes were taught in knot tying, and a good confidence builder was enjoyed.

Sadly, I don’t seem to have a single picture of me rappelling.