In 1952, Boeing, using its own money, began development of a jet transport prototype. From its first flight in July 1954, Boeing knew it had a winner, and proceeded to develop two new aircraft based on this 367-80 design.

A larger, longer variant went on to become the world famous Boeing 707. But a smaller, shorter plane, very similar to the Dash Eighty, would also go on to a remarkable career.

In the mid-1950s, the Air Force Strategic Air Command was shedding its piston powered B-29, B-50, and B-36 fleet in favor of jet bombers such as the Boeing B-47, and B-52. As fantastic as those two jets were, they still needed in flight refueling to meet the range requirements to hold at risk targets deep inside the Soviet Union. Existing tanker aircraft, based on the B-29, and its cousin the B-50,* simply couldn’t provide enough fuel, nor fly fast enough, to fulfill the mission.

So it came to pass, in the mid 1950s, the Air Force, wanting a jet tanker for Strategic Air Command, held a competition to build one. And as we all know, the winner was… Lockheed? Yep. Lockheed. They had proposed a jet with a configuration similar to the later VC-10. But since it would take some time before Lockheed could get around to building any tankers, the Air Force gave an interim order to Boeing to build 28 tankers based on its Dash Eighty prototype. That order soon grew to 250 tankers. And pretty soon, the Air Force it would be silly to support two separate tanker fleets, and cancelled the Lockheed program. Boeing’s order book continued to grow, and in addition to tankers, “vanilla” transport versions without the refueling equipment were ordered.  The basic designation for the design was the C-135. Tanker variants were known as the KC-135 Stratotanker.  From 1957 to 1965, Boeing delivered 820 tanker and transport C-135 Stratolifter aircraft, the vast majority of them as KC-135A tankers. 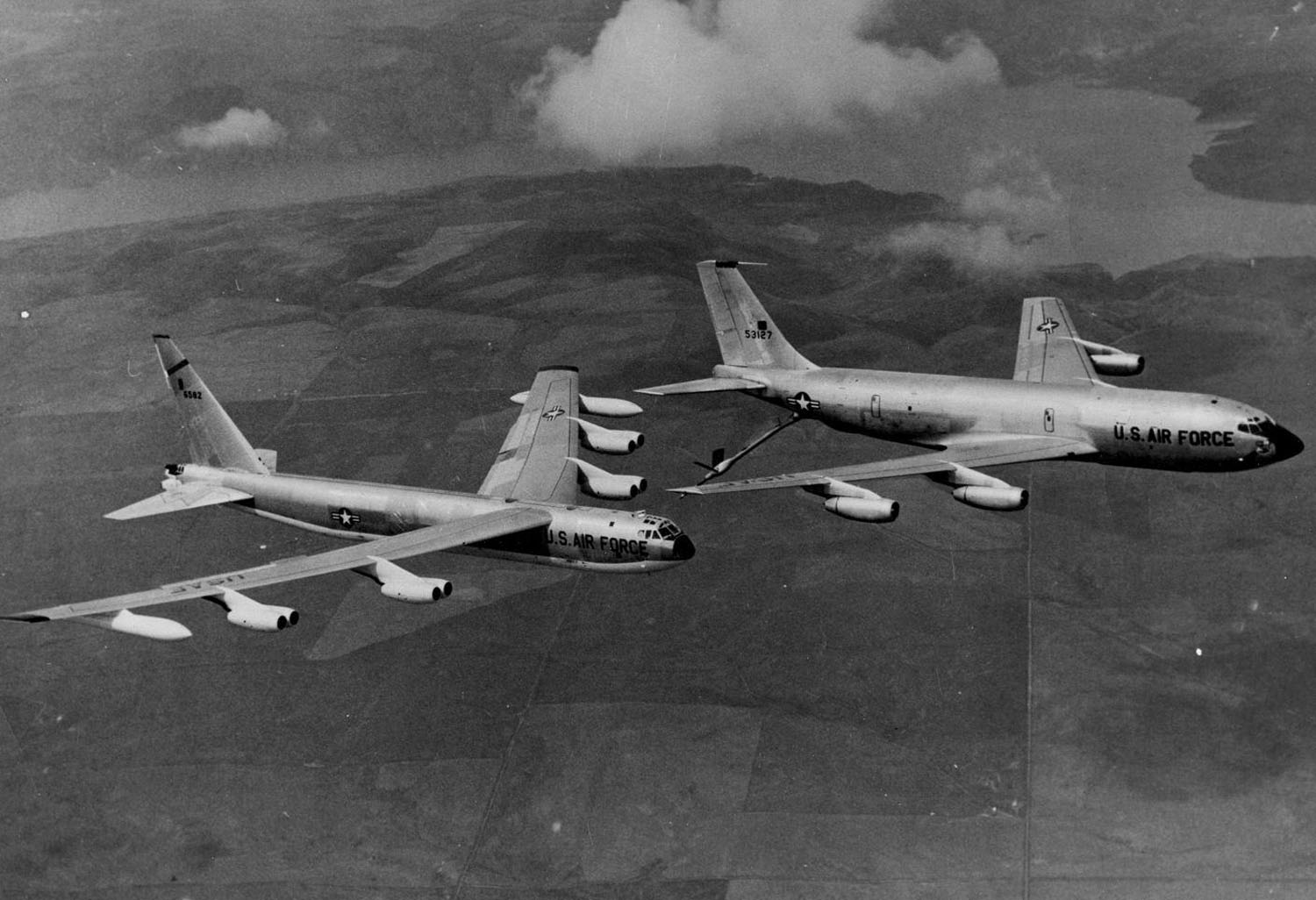 Originally intended primarily to support the Strategic Air Command’s bombers, the KC-135A tanker fleet found itself more and more involved in supporting tactical aircraft in Vietnam. The F-105s and F-4s based in Thailand would have been unable to strike the heart of North Vietnam without the support of the Stratotankers. Since that time, the fleet has been deeply involved in virtually all use of tactical airpower, and increasingly has supported US Navy carrier operations, particularly the very long flights in Afghanistan and Iraq.

From first delivery to the early 1980s, the KC-135s underwent very few modifications.  That’s a testament to the basic soundness of the design. But engine design in those years lead to far more powerful engines, with much better fuel efficiency, and lower noise levels. As commercial 707s began to retire, some KC-135s assigned to the Air National Guard were re-egined with their surplus TF-33 turbofan engines. More powerful engines meant a shorter take off roll. More fuel efficiency meant more of the fuel onboard could be transferred to other aircraft.  These converted jets were known as KC-135E’s.

Fifty-six KC-135A’s were specially modified to support the SR-71A. Since the SR-71A uses a special fuel (JP-7) that normal jets can’t use, these modified tankers had to be able to segregate their own fuel from that intended for offload. Designated KC-135Qs, several tankers could be expected to support every operational SR-71 sortie.

Eventually, the remaining KC-135A fleet was re-engined with the CFM56 high bypass turbofan engine, essentially identical to what a modern civilian airliner would use. Twice as powerful as the original J57 engine, far more fuel efficient and much quieter, it has given the fleet much lower operational costs, lower maintenance requirements, and better available fuel offload.  With the new engines, they were redesignated KC-135R.  With the retirement of the SR-71, the KC-135Q’s were also re-engined, and designated KC-135T, and used alongside the “R” fleet.

Finally, from 1999 to 2002, the fleet, now down to about 365 jets, underwent a modernization program known as Pacer CRAG (Compass, Radios, Avionics, and GPS), which completely updated the flight deck to modern standards. With the new engines and flight deck, navigator position could be eliminated, and crew costs reduced, all while improving aircraft efficiency and reducing operating costs.

Today, the KC-135 still forms the backbone of the US tanker fleet.

Almost as soon as the first of the C-135 family entered service, the Air Force recognized that such a sound airplane could be used for other roles.

One of the very first “off label” uses was to remove the refueling boom at the rear of the jet, and replace the operator station with a battery of panoramic cameras. These RC-135As were used for photomapping and topographical survey.

They also spawned a bewildering array of modified C-135 airframes for a variety of specialized reconnaissance roles, most in the Signal Intelligence (SIGINT) and Electronic Intelligence (ELINT) missions.

The Air Force tends to give programs a two word code name, generally with the first word being the “umbrella” for a particular genre of programs, and the second one being a specific designator. For instance, virtually all programs that begin with “Pave” have to do with electro-optical and infrared sensors to improve night flying or targeting.

The two major programs that most recon and special mission C-135s fell under were “RIVET” and “COBRA.” RIVET was usually a SIGINT or ELINT program, while COBRA usually meant gathering intelligence on Soviet ballistic missile tests.

Several times, a single KC-135 or C-135 would be specially modified for a particular purpose, receiving both a new designation, and a new code name. One example would be the C-135B modified in 1960 to RC-135E RIVET AMBER, equipped with a special phased array radar to track ballistic missile warheads. With the stupendous cost of $35,000,000 for the radar alone, it was at that time probably the most expensive plane in the Air Force.   Only one was modified. After it was lost in an accident in 1969, it was not replaced.

Quite a few aircraft would see their original mission change, undergo further modification, and receive yet another new designation and code name. Keeping track of all the variants is beyond the scope of this post, but suffice to say that the number of variants has used up almost all the available letters for designations.

The major RC variant is the RC-135V/W RIVET Joint, used both for strategic and tactical SIGINT and ELINT. Even today, RIVET Joint supports the war in Afghanistan.

That doesn’t count the various EC-135 variants, most (but not all) of which served as airborne command posts. Per wiki:

Then there are the “weather reconnaissance” WC-135s.  The only “weather” the WC-135C and WC-135W ever looked for were radioactive clouds produced by nuclear explosions. They use special air sampling equipment to retrieve particulate matter to analyze the results of foreign atomic testing (and they’re still in service).

Various C-135s permanently converted to specialized test aircraft were designated NKC-135s, most being one of a kind modifications.

This doesn’t even count the several Air Force jets that actually used the Boeing 707 airframe, such as the E-3 Sentry AWACS, the E-8 JSTARS, or the E-6 Mercury TACAMO.

For well over half a century, the C-135 family has served the United States well, and current projections have it serving until, at a minimum, 2040.  I guess when it hits 80 years old, it will have earned its retirement.

*The B-50 was essentially a B-29 with the R-3350 engines replaced by the R-4360- a radial engine of 4,360 cubic inches of displacement. The other major piston powered tanker of the time, the KC-97, used the wings and powerplant of the B-50 with a new, much larger fuselage to form the C-97 transport, which was further modified to the KC-97 tanker.  The KC-97L would actually continue to serve for a long, long time, with the last one retired from the Texas Air National Guard in 1978.

7 thoughts on “Getting your money’s worth”