We wrote a little earlier about the controlled minefields operated and maintained by the Coast Artillery of the Army as a harbor defense weapon. But of course, most mine warfare at sea was a matter for the Navy.

Most of what I wrote in that earlier piece focused on what we tend to think of when we think of naval mines, that is, the floating contact mine. To be sure, that is still a viable form of mine warfare, but it is only one of several.

The floating contact mine was kinda sorta invented during our own Revolutionary War,  by David Bushnell, the same inventive mind that first fought submarine warfare with his submersible The Turtle.  While neither effort was successful, both were certainly portents for the future of warfare.

The moored floating contact mine as we know it came into use in the late 19th Century, but wasn’t generally accepted as a viable weapon until the Russo-Japanese War of 1905, where it enjoyed fair success.

A moored contact mine is quite simple. From the earliest versions to those in use today, they have changed little. A hollow steel shape, often a sphere, is filled with explosives and an electrical detonator circuit. The contact horns on the mine are a soft metal, such as lead, that is easily crushed. Inside each horn is an ampoule containing battery acid.  Crushing the horn by contact with a ship crushes the ampoule, and the acid flows into an lead acid battery, generates current, and sets off the detonator. The resulting blast in such close contact to a vessel is usually sufficient to hole the ship, and often enough to sink it.

While you could (and some people did) just let these mines loose to bob around in the open sea, generally, the mine was moored to an anchor on the seabed. The anchor was usually a simple block of concrete or other heavy materiel.  Now, much of the ocean is thousands of feet deep. It would be impractical to have a mile or two of cable to moor each mine. But there are many areas of the ocean that are only a few hundred feet deep. And coincidentally, because these areas tend to be near natural chokepoints or significant ports and harbors, that happens to be where most of the world’s shipping passes through. For instance, if you want to shut off German shipping, you have to mine the North Sea. It tends to be shallow enough to be practical to do so. From the German point of view, most of the English Channel. or say, the Thames estuary, is likewise shallow enough to profitably mine. So far, so good. But there are still challenges.

Ideally, a moored mine will not float on the surface, but rather just below it. First, this conceals the minefield. Second, blowing holes below the waterline, or even better, directly under the keel, of a target ship is preferred. But most ships don’t draw more than 10’ to 20’ of draft. So when planning a minefield, the length of the moored mine mooring cable has to be preplanned and cut to just the right length for the specific waters to be mined.

Moored mines were fairly heavy weapons, between a couple hundred pounds of explosives, the steel casing, and the anchor. And it takes a goodly few to lay a serious minefield. And since any attempt at laying a minefield in an enemy’s home waters was likely to provoke a response, early minelayers were fairly large, fast vessels, sometimes cruisers, sometimes converted passenger liners.  In later years, particularly just before World War II, several navies, including our own, designed purpose built minelayers.  Many destroyers were also converted to minelaying duties.

These moored contact mines were (and still are) effective weapons, but they had their drawbacks. First, because a ship had to physically contact them, a minefield had to be sowed fairly thickly to be effective. Second, the impracticality of mooring them in deeper waters limited the areas they could be used in. But on the eve of the US entry into World War I, the US came up with a very nasty little improvement. A steel hulled ship moving through salt water is already just about half a battery. So the mine designers simply put the other half of the battery in the mine. All that was needed was a simple copper wire to close the circuit, and the firing chain would be activated.

The K-pistol on the US Mark 6 mine used a floating copper wire to initiate the explosive chain. 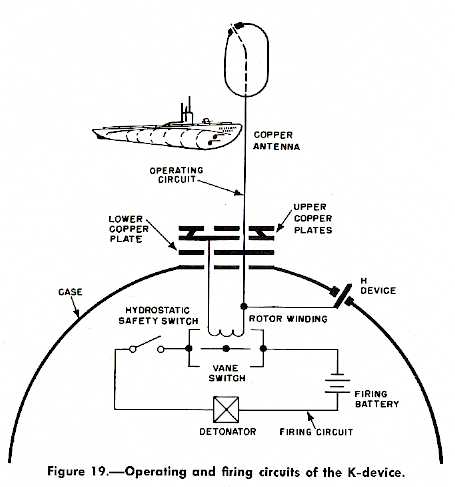 And it turns out, there was a bit of an added bonus.  You would think the most deadly place for a mine to detonate would be directly against the keel of a ship. But as it turns out, the most effective location is directly under the keel, but not in contact, rather, a little deeper. The initial blast would tend to crack the keel, but the follow on bubble jet effect would almost certainly shatter any remaining structural strength.

That blast is from a Mk48 torpedo, but the principle is the same. And the K-pistol just happened to perfectly position mines for such an attack. It was so effective, the Mk6 was in service at least until 1979.

So far, we’ve only discussed surface laid contact mines. We’ll talk about some other types in later installments.