I was rumaging around in my referrals on the dashboard and saw a fair number of hits from Think Defence, an astonishingly good UK blog about UK defense matters. They were very kind to link my Falklands series a while ago.

I try to visit them from time to time. First, it’s just good blog. Second, the UK view on matters has a very different “flavor” than US based blogs. Translating from “English” to English can be a challenge, but it’s worth it. Finally, they tend to be more in-depth on matters than I am. Which, that’s fine. I view my mission here as presenting complex issues in a format a layman can easily grasp.

I wanted to highlight a couple posts on logistics and improvisation that TD has posted over the years. First, the humble ISO shipping container. You’ve seen gazillions of them on trucks and trains and ships. Have you given any real though to how they are used militarily?

The concept of intermodal transport is deceptively simple but without it, the global supply chain would be very different.

Goods leave the production line, loaded onto pallets, which are loaded into containers. The container is closed and transferred by road to a port, where it is stored with other containers until the ship is ready. The container joins the thousands of others and is loaded into the hold of a waiting container ship. To make things even quicker still, modern container ships don’t have hatch covers, just efficient bilge pump.

At the end of the sea journey the reverse happens.

It is an intricate and finely choreographed routine but underpinning it’s success is the concept of intermodalism; using several modes of transport to move a single load, without excessive handling. The container remains sealed and handled as one, whether it is being transported by road, rail or ship. The goods themselves are handled a minimum of times, more handling equals higher cost and lower speed.

TD also goes on to discuss specialized containers tailored to the battlefield, both smaller, more manageable container sizes, and special purpose container systems for logistics.  Examples include tool sets and parts bins that can be prepackaged for shipping direct to the theater, and then used directly, rather than being unloaded into shop spaces.

In US service, the most commonly seen specialized container based system is the CHU, or Containerized Housing Unit: 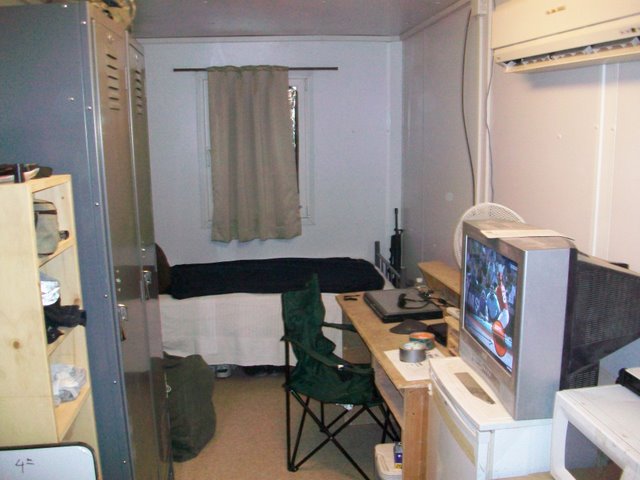 Tens of thousands of US troops in Iraq and other theaters have been housed in CHUs, with far greater comfort and sanitation than if they’d been forced to live under canvas or in local buildings.

The other TD article I found fascinating was a discussion on the M/V Atlantic Conveyor, a merchant vessel inducted into service with the task force for the recapture of the Falklands. An interesting ship to begin with, she was a combination container ship-RO/RO vessel designed to load trucks and other vehicles.  When the Brits realized they had a desperate need to transport additional Harriers and helicopters to the Falklands, they quickly converted her to carry these aircraft. How quickly? About 10 days! You can’t even order Post-It notes that fast in the US military.

The AC wasn’t a perfect solution, but it was better than nothing. Sadly, the AC was lost to an Exocet missile strike against the task force.

I strongly encourage you to go poke around, and see what our friends across the pond think about military matters.