After posting the VA-25 Toilet Bomb, I came across another unusual use for bomb racks, though this one had a far more practical application.

When British Spitfire squadrons began to be based on the Continent after D-Day, they were prepared for hardship and privation. What they weren’t prepared to do was go without their beer. 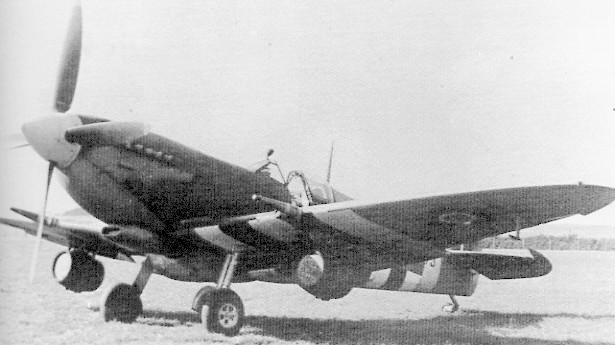 In the comments at Neptunus Lex, Hogday brings us the story:

In the lighter moments of World War II, the Spitfire was used in an unorthodox role: bringing beer kegs to the men in Normandy.
During the war, the Heneger and Constable brewery donated free beer to the troops.
After D-Day, supplying the invasion troops in Normandy with vital supplies was already a challenge. Obviously, there was no room in the logistics chain for such luxuries as beer or other types of refreshments. Some men, often called “sourcers”, were able to get wine or other niceties “from the land” or rather from the locals. RAF Spitfire pilots came up with an even better idea.
The Spitfire Mk IX was an evolved version of the Spitfire, with pylons under the wings for bombs or tanks. It was discovered that the bomb pylons could also be modified to carry beer kegs. According to pictures that can be found, various sizes of kegs were used. Whether the kegs could be jettisoned in case of emergency is unknown. If the Spitfire flew high enough, the cold air at altitude would even refresh the beer, making it ready for consumption upon arrival.
A variation of this was a long range fuel tank modified to carry beer instead of fuel. The modification even received the official designation Mod. XXX. Propaganda services were quick to pick up on this, which probably explains the “official” designation.

and Fliterman gave us the pic. Thanks, guys!

Later on, British and US squadrons were banned from using kegs. Instead, they’d clean out a drop tank and ferry beer forward in those. A quick trip from sea level to 30,000 feet would chill beer down nicely.

Just don’t get absent minded and switch from internal to external fuel.

1 thought on “As far as unusual external stores go, I think this is a far better idea.”